Sajal sends best wishes to Ushna on her engagement 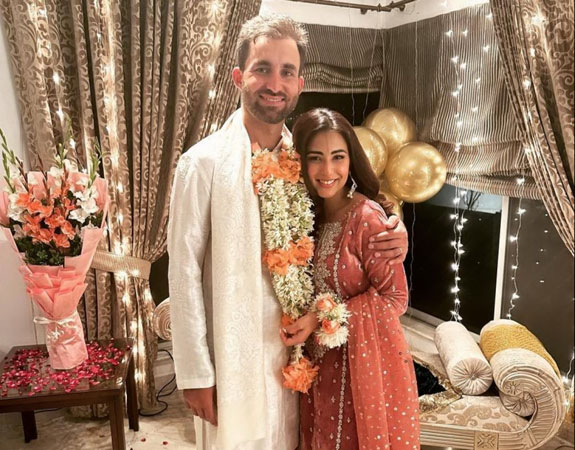 Alif actress Sajal Aly, taking it to her social media, sends best wishes to actress Ushna Shah on her engagement with Hamza Amin.

Aly posted Ushna’s engagement pictures on her Instagram story and wrote: Mubarak Mubarak Mubarak. Sadi kuri we kam nahi!!!! Soooo happy to hear the news! Big Congratulations. I am soo happy that you have found each other. Wishing you a lifetime joy, love and happiness.”

Ushna got engaged to Hamza yesterday in an intimate ceremony that included only their immediate family and friends. Their relationship was quite obvious for sometime as they were spotted together frequently last year. The couple looked adorable together on their big night. Hamza wore an ivory-coloured Kurta Pajama whereas Ushna opted for a pink traditional dress with light makeup.

Ushna Shah is one of the renowned artists of the Pakistani entertainment industry as she gave audience some extremely impactful performances in hit dramas like: Alif Allah or Insaan, Balaa, Habs and Bashar Momin.

Meanwhile on Sajal Aly’s work front, she will be featuring in Jemima Goldsmith’s film What’s Love Got To Do With It directed by Indian filmmaker Shekhar Kapur.