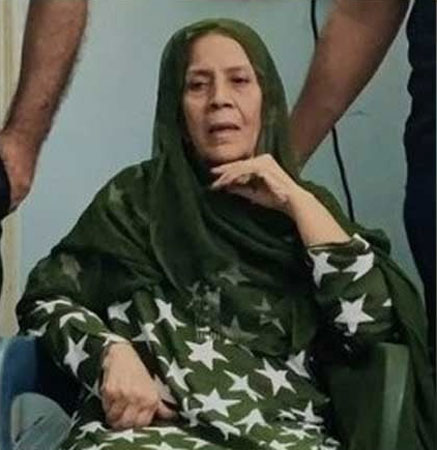 The news emanating from Karachi about Bilquis Khanam’s demise shattered my nerves. I recalled that I had written on her talent and personality in 2008. Nothing has changed except that she is no more with us physically except her music shall remain with us or decades to come. My book Melody Makers has a chapter written on her. This tribute is reproduced below along with her as a good housewife who worked hard to make her marriage with Ustad Raees Khan work and turn her son Farhan Raees Khan into as good a Sitar Player as her husband.

“It seems only yesterday though four decades have passed since Bilquis Khanum and this scribe appeared in Kanwar Aftab Ahmad’s musical Mirza Sahiban. We played the roles of Sahiban and Mirza respectively of the famous folklore. PTV used to be housed in a shed behind the present premises of Radio Pakistan, Lahore. Very senior and proficient programme producers like Aslam Azhar, Agha Nasir, Fazal Kamal, Muhammad Nisar Hussain and Kanwar Aftab Ahmad produced LIVE programmes. There were hosts of dedicated producers that joined this fraternity later like Rafiq Ahmad Waraich, Syed Razi Tirmizi, Zaheer Bhatti, Azam Khurshid, Zafar Samdhani and Nisar Hussain. The next generation of producers who worked from Assistant producers to the full-fledged ones comprised Nusrat Thakur, Ishrat Ansari, Ijaz Mian, Khwaja Najam, Farukh Basheer etc. The programmes comprised mostly dramas and musicals apart from telecasting the news. Qavi Khan, Rafi Khawer Nanha, Qamar Chaudhry, Kamal Ahmad and Ali Ijaz are the product of these days. Hard work and dedication was the order of the day. Initially the transmission started for only three hours. Bilquis Khanum, Salim Raza, Mushtaq Hashmi and this scribe were among the singers who started singing for PTV since its inception. We sang for light music programmes such as ‘Jhankar’. The 90-minute live musicals were composed by veteran composer Mian Sheheryar. We also sang and acted live for the other musicals such as Sohni Mahiwal and Heer Warris Shah. It was therefore a matter of happiness when this scribe came across Bilquis Khanum only recently. She is now sixty being one of the most senior female ghazal singers of Pakistan. She has a deep, sensitive, resonant and tuneful voice that is very special for female gender. She disclosed that she had learnt the art of classical and semi classical genres of music from Ustad Muhammad Sharif in Lahore and from Ustad Ashiq Ali Khan in Karachi. It was latter that composed her famous song Anokha Ladla in Raag Darbari in Karachi. She started Radio programmes in 1964 and was among the artists that appeared in the inaugural test transmission of PTV by NEC in 1965.

Bilquis Khanumm’s main contribution has been singing voluntarily for Pakistani Army on the front lines during the 1965 War. She sang for Army Jawans on Khem Karan, Bedian, Cham, Jorian, Sargodha, Sohan Sakesar, Sialkot, Cherat and Kharian sectors. She sang two songs each on all the functions in all the languages to boost the morale of the Jawans. For the September 06 Shaheed’s her song ‘Mat Samjho Hum Ney Bhula Diya’ and her Milli Naghma ‘Mera Watan Mujh Sey Yeh Keh Raha Hei’ are still fresh in the memories of the masses.

Bilquis Khanum has sung as background singer for Pakistani movies also. Khwaja Khurshid Anwar used her voice with Nasim Begum for his movie ‘Guddu’. Music composer Khalil Ahmad used her voice for a song ‘Balma Anari’ for the movie Tasveer. She also sang for music director Nashad in the movie Farz and for Mian Sheheryar movie ‘Bibi’. She sang with Madam Nurjehan for the movie Nawabzadi. She has sung for music composers Ustad Nazar Hussain, Baba Chishti, Nisar Bazmi, Suhail Rana, Nashad, Bakhshi Wazir, Mian Sheheryar, Javed Allah Ditta, Khalil Ahmad, Rehman Verma, Safdar Hussain and other senior music composers for films, TV and Radio. She has been singing live all her life on the stage both at home and abroad like in East Africa. She has participated in numerable State and private shows.

Bilquis Khanum is very proficient in rendering light popular songs and Ghazals. Her singing career has lasted for more than 45 years and she is still going strong though she is critical of absence of melody in the latest songs being churned both in India and Pakistan.

Since she has travelled widely in India she believes that both State and private entrepreneurs encourage classical music especially in Calcutta. She is married to Ustad Raees Khan Sitar Nawaz who is a famous international Sitar Player. Among her two sons, the elder one namely Farhan Raees Khan accompanies his father in most of the recitals whether in India, Pakistan or in the US. Bilquis Khanum still sings and one of her latest appearance for a private TV Channel reminded the viewers of her glory of the yesteryears.