* Renderings reveal some of the rental's eye-catching features, which include a swimming pool and a glass-edged walkway on the wing of the plane, which is partially cantilevered over 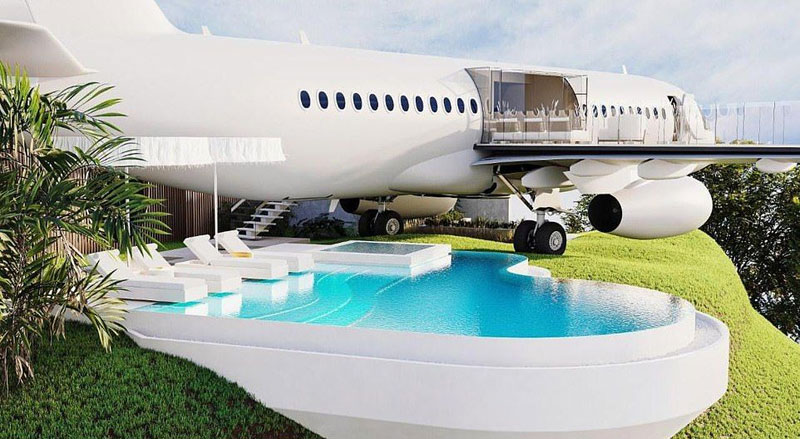 It’s plane-ly an amazing place to stay. An abandoned Boeing 737 has been transformed into a stunning holiday rental that’s perched on a 150m-high cliff near Nyang Nyang beach in Bali, Indonesia. Renderings reveal some of the rental’s eye-catching features, which include a swimming pool and a glass-edged walkway on the wing of the plane, which is partially cantilevered over the cliff edge. Called ‘Private Jet Villa by Hanging Gardens Air’, the unique rental is something to save up for – it’s priced at £6,000 per night on Booking.com. The plane was originally owned by Indonesian company Mandala Airlines, which ceased operations in 2014. Russian entrepreneur Felix Demin bought the derelict model last year and disassembled it, hauling it by truck and crane to the cliffside spot in September 2021. It took a week to transport the plane’s parts to the cliff after securing the necessary access permits, he revealed. The Bali resident said that the disassembled plane was about to be sold as scrap metal to China when he purchased it. At the time, he anticipated that it would become a popular spot for photographers. Guests enter the villa grounds via a wooden archway, walking along a stone staircase that leads the way inside the aircraft. Inside, there are two bedrooms furnished in neutral beige and stone tones, with curtains draped by the beds and wooden flooring. There’s a cream-toned living area and a fully-equipped kitchen for preparing meals, as well as two separate bathrooms. Pictures show that there’s a stylish stone tub positioned at the nose of the plane, tucked below the cockpit windows. Guests can whip up cocktails in the villa’s bar area and an a la carte breakfast, free
Wi-Fi and free private parking are part and parcel of a stay. Outside there are manicured gardens, complete with a chic outdoor seating area with an L-shaped sofa and a fire pit. Lined with sun-loungers, the swimming pool, built by the glass-edged wing walkway, has views towards the Indian Ocean. ‘Externally and structurally, this is a jet aircraft that we have turned into a luxury hotel,’ says Demin. Private Jet Villa by Hanging Gardens Air is available to rent from April 2023.