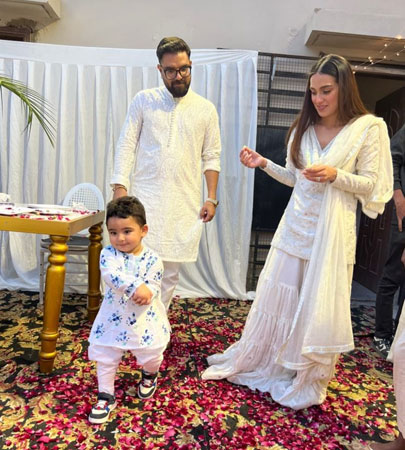 Leading Pakistani actress Iqra Aziz has a lot happening on her social media account these days. The Diva is the most followed celebrity on Instagram in Pakistan.

The Hussain household was full of joy because Yasir’s niece was getting married, and the whole family got together to celebrate. Iqra’s mom and sister, who are on her dad’s side, also joined in the fun. The family wore matching outfits to events and looked beautiful at all of them. Iqra and her sister both wore white to the Nikkah, and Yasir also wore white to match his wife and the theme of the whole event. Little Kabir Hussain looked cute as he played with his family while wearing a traditional white and blue kurta.

She is known for her leading role in several television serials including Socha Na Tha, Deewana, Kisay Chahoon, and many more.

She has 9 million followers on her Instagram account. She is one of those actresses who has always inspired a positive and upbeat reaction from the audience.

Iqra is one of the most talented and top-class actresses in the showbiz industry. With her outstanding performances in Pakistani films and television dramas, she has won millions of hearts.