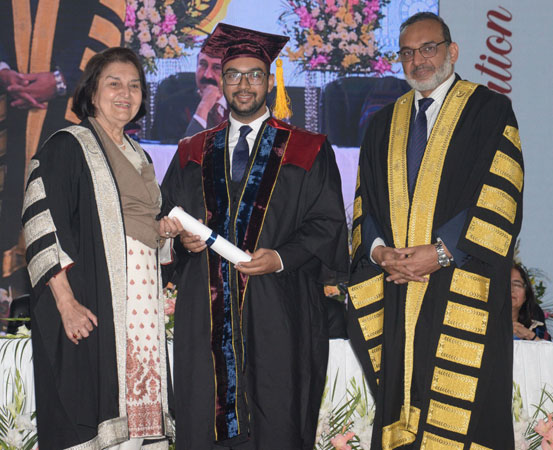 The 25th convocation of the University of Central Punjab continued for the second day at the Expo Centre Lahore.

990 students of undergraduate program, 110 students of postgraduate and PhD programs were awarded degrees. There were 311 graduates, undergraduates and postgraduates from the Faculty of Information Technology, 172 from the Faculty of Media and Mass Communication, 152 from the Faculty of Engineering and 465 from the Faculty of Sciences and Technology. 85 students won gold, silver and bronze medals. Dr. Nassar Ikram, Proctor UCP in his address at the convocation congratulated the successful students, their parents and teachers. He conveyed his best wishes for the future career and future achievements of the students. He said that the students would play their role in the service of the country and the nation. Deans of faculties distributed degrees and medals to position holders and graduates along with Guests of honor. In his address, Saleem Ghauri congratulated the students and said that the graduating students will also show full potential in the field of practice. At the end of the convocation, the guest of honor was presented a special honorary souvenir of the convocation. A total of 2176 graduates were awarded degrees in the convocation.