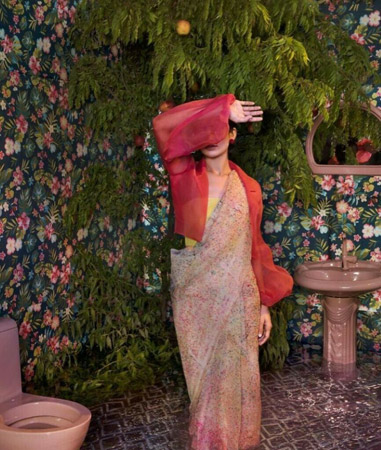 Pakistani fashion brand Demesne Couture came up with a ‘different’ concept for promoting itself as the photoshoot featured a model alongside a toilet seat, but it seemed indigestible to internet users.

Fashion brands always try to come up with unique and creative ideas for branding to stand out.

In the race of same, Pakistani fashion brand Demesne Couture chose a novel idea where the counterpart of the female model was not a male but a toilet seat and other washroom stuff.

In one of the photos, she can be seen sitting on the toilet seat as well.

According to the creative designer of the brand, the idea behind the photoshoot was to highlight personal space and privacy of women, which rarely exists.

However, despite Demesne Couture’s thoughtful approach, the post received severe backlash because of the presence of the toilet seat.

People opined that the brand’s creative team could opt for so many things to represent women’s privacy and personal space, but they went with the toilet seat.