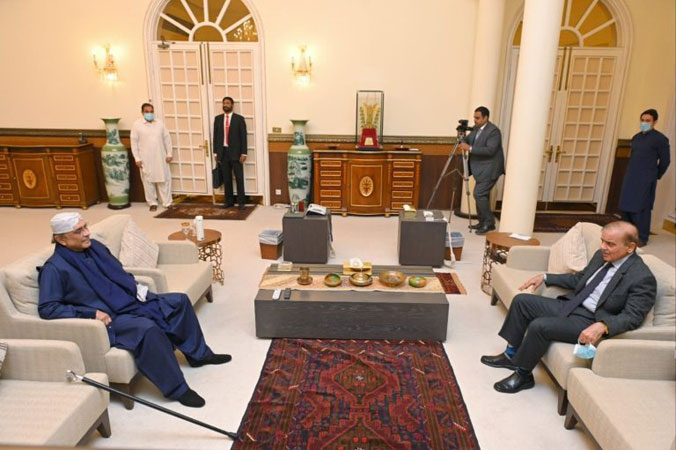 Prime Minister Shehbaz Sharif and former President and Co-Chairman Pakistan People’s Party (PPP) Asif Ali Zardari on Tuesday discussed the country’s overall political situation. The former President, who arrived at the PM House, was welcomed by the Prime Minister, a press release issued by the PM Media Wing said. Asif Ali Zardari inquired after the health of Prime Minister Shehbaz Sharif. The Prime Minister thanked the former President for the visit. It is pertinent to mention here that Shehbaz had tested positive for Covid-19 on November 15 after returning from the UK. It was the third time the prime minister had tested positive for the virus. The meeting between the two leaders was held amid the process for the next army chief’s appointment. A day ago, the prime minister had sought a defence ministry summary for the appointment of the new army chief, along with the service dossiers of all prospective candidates, as the government seems set to name outgoing Chief of Army Staff Gen Qamar Javed Bajwa’s successor by Friday. The military’s media wing announced Tuesday night that it had forwarded the names of six lieutenant generals for the selection of army’s two top slots to the Ministry of Defence.