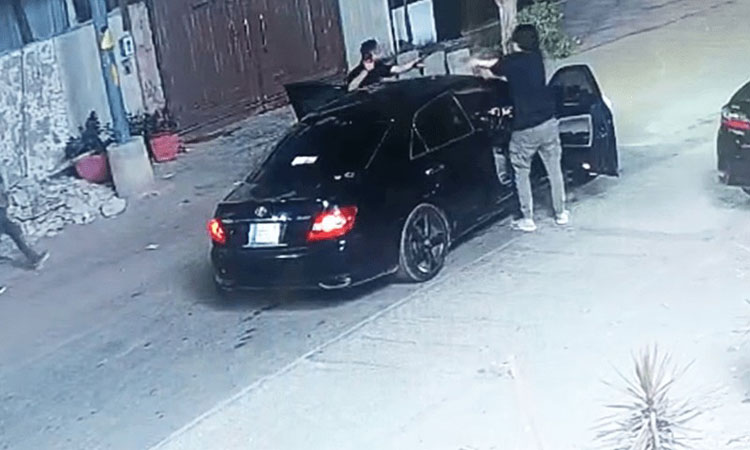 A policeman was shot dead by a car driver, reportedly the son of a former deputy commissioner, following an altercation between the two in Karachi’s Defence Housing Authority (DHA) Phase V late Monday night.

The martyred cop, Abdul Rehman, and his colleague chased the suspected shooter, identified as Khurram Nisar and spoke to him after they allegedly noticed suspicious activity.

In the same video, the policeman can be seen holding a pistol and gesturing Khurram Nisar to sit in the car and go to the police station.

According to the police, Khurram Nisar, came to Karachi from Sweden on November 5. He lives there with his wife and two children.

DIG South Irfan Baloch told media that the cop accompanying Abdul Rehman recorded his statement, according to which they saw Khurram Nisar forcing a woman to sit in the car near Boat Basin. Baloch said that when the cops approached Khurram Nisar, the woman fled, while they tried to control him, but couldn’t get hold of his gun as he resisted.

This was when Abdul Rehman sat in the car with Khurram Nisar, while the other cop chased it. The DIG said that the cops tried to take Khurram Nisar to Darakhshan Police Station, but he increased the speed of his car. At this, Abdul Rehman tried to stop Khurram Nisar and both of them got out of the car. The two engaged in an argument and pulled their guns on each other, he added.

According to Baloch, Khurram Nisar’s home in Karachi is near the crime scene in DHA Phase 5, where he left the car used in the incident at home and fled in another car. The police raided Khurram Nisar’s house and seized weapons, documents and the vehicle used during the shooting. The house watchman was also detained.

The police say that a copy of Khurram Nisar’s passport has also been seized and a search is underway to find the vehicle he escaped in. The houses of his friends are also being searched, while pictures of Khurram Nisar and details of his travel documents have been provided across airports. Meanwhile, the statement of the policeman accompanying Abdul Rehman is also being investigated.

The case of the murder of the policeman was registered on the complaint of a sub-inspector at Darakhshan Police Station. The suspected shooter faces charges of terrorism, murder, and shootout with police, officials said. The martyred policeman was shot in the right temple.

The FIR also said that the policeman fired at the shooter, but missed.