Michelle Obama has some fascinating advice

* In her new book, 'The Light We Carry,' the former first lady shares coping strategies for surviving stress and uncertainty 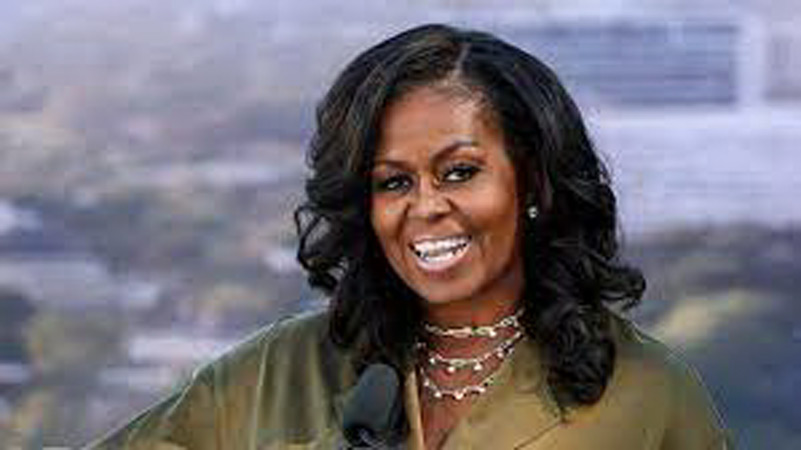 It’s not easy being Michelle Obama. Fabulous, yes. Easy, no. She is a world-class worrier, a change-avoider and, by her own admission, a bit of a nervous Nellie. (As a child, she almost missed her chance to be in a Christmas play, wearing a beloved red velvet dress and patent leather shoes, because she was terrified of sharing the stage with a stuffed turtle.) And let’s just say that spontaneity is not her strong suit: “I’m not a leaper or a flier, but a deliberate, rung by rung ladder climber,” writes the former first lady in her new book, “The Light We Carry.” I’m pretty sure she makes lists, then makes lists of those lists, then color-codes them all.

So it is perhaps no surprise that Obama’s road map for uncertain times resonates in ways that other self-help books do not. If I am going to have someone guide me through this terrain, I don’t want to hear from preternaturally poised Martha Stewart or unflappable George Clooney or, for that matter, that tower of cool and confidence Barack Obama. For this crew, self-assurance seems like a birthright.

I want to hear from Michelle Obama, who doesn’t always like the way she looks, who felt like an outsider after becoming the ultimate insider; the one who easily becomes lonely; the striver who has spent a lifetime dogged by the question: Am I good enough? The person who sweats. Because this person does not blithely claim to have the answers. She is on a journey. Through her stories, experiences and thoughts, we’re finding the light with her. Lucky us.

I hate to use the word “relatable,” conjuring as it does that Us Weekly feature “Stars – They’re Just Like Us!” But the woman is relatable. In her 2018 memoir, “Becoming,” she told us about her troubles getting pregnant (and those of us who’ve been there enjoyed the detail about her husband frantically driving back from a late-night vote in the Illinois Legislature to meet her ovulation window – this is a guy I’d trust with the nuclear codes) and the bickering and resentments that led the Obamas to seek couples counseling when they had young children.

In a chapter on friendship, Obama writes about the importance of having a “kitchen table” of girlfriends. Although we are unlikely to face the problem of trying to acquire new kindred spirits while surrounded by the Secret Service, and most of us don’t have to worry that casual venting over nonsense will end up splashed across social media, the very act of trying to make new friends – the awkwardness, the profound desire to find people we can trust – that is very relatable. Who was the last first lady you could say that about?

Not that Obama is a blurter. We are perfectly aware of how carefully she chooses her words and the stories she tells. But she reveals herself, subtly and endearingly, in a dozen different ways.

After “Becoming” became one of the best-selling memoirs of all time, Obama wanted to think about what we all need to get through turbulent times. And indisputably it has been a time where public and private are deeply intertwined. The loss of millions during the pandemic (including more than a million Americans); the corrosive and cumulative effect of George Floyd’s murder; the Capitol insurrection on Jan. 6; and, more generally, the explosion of divisiveness during the Trump administration. Each chapter is a tool, as Obama puts it, to help keep yourself together. Her thoughts are nuanced and never prescriptive; she tells stories about what has worked for her. In a chapter aptly titled “The Power of Small,” for example, she tells us about how, when the world seems overwhelming, little victories can see us through.

There are chapters on leading with kindness, on partnering (where she spills just enough tea on Barack to make it fun) and on decoding fear. Not ignoring or denying it, but making sure we don’t squander an opportunity because of it. In a chapter on parenting and being parented, Obama offers advice from the writer Toni Morrison: “When a kid walks in the room, your child or anybody else’s, does your face light up? That’s what they’re looking for.” Does it give me pause that sometimes Obama seems a little too efficient, too capable? Well, in any situation, she does acknowledge the team of people behind her, and she also notes that she begged her mother to come and live in the White House to help her out and give her daughters a sense of normalcy. Still, one can only take so much. I’ve decided that the sweaters she knits are missing stitches, and one arm is longer than the other. In other words, like a sweater I would knit.

Finally, Obama devotes a chapter to discussing the phrase she’s most often asked about, the one that she delivered at the 2016 Democratic National Convention and that will inevitably appear in her obituary: “When they go low, we go high.” She writes, “What does it really mean to go high? It seems possible that I might spend years trying to answer this question.” What does it mean when, as a nation, we suffer punches to the gut year after year – Charleston, Charlottesville, white supremacy, mass shooting, and the knee-jerk “thoughts and prayers” that followed? I won’t get into the details here, but it’s an argument of great moral clarity that involves “drawing a line in the sand,” then asking yourself, “Which side of this do I want to be on?” It’s about not looking away, even when we want to.