‘Falling for Christmas’: Lindsay Lohan falls into the Netflix algorithm 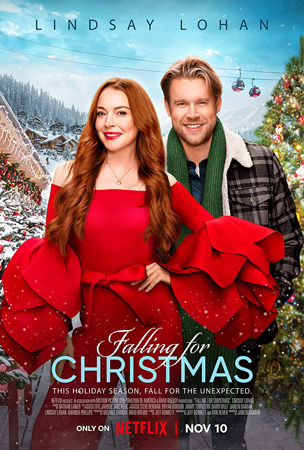 The bait-y allure of a real Lindsay Lohan comeback has been tied more to the headline than the small print, the troubled star’s first lead role in more than a decade mattering more than what it’s actually in. Because for many of us of a certain age and a certain pop culture investment, the enthusiastically publicised ups and mostly downs of her life have given us a deep-rooted desire to see her succeed, working against a negative tabloid and industry-at-large perception and also working against her worst self.

The textbook descent from precocious pre-pubescent to twentysomething tearaway inevitably overshadowed the undeniable fact that Lohan was, at her height, a winning presence, a natural who held her own at a young age against some of the greats. Her return to the screen is both minor and major; minor in that it’s in a rote Hallmark-adjacent Christmas movie and major because it will be available on Netflix, where it will probably be a substantial hit for an audience eager for a) festive fluff and b) festive fluff starring Lindsay Lohan.

While her presence in Falling for Christmas might raise expectations above those one might usually have for a film of this calibre (subterranean at best), the script is as off-the-production-line as they come, indistinguishable from any of the red-and-green guff that gets churned out at this time of year. With expectations then low, there’s a certain background watchability to it for those who know and enjoy the formula but for others either hoping for something great or so-bad-it’s-great, disappointment might be waiting under the tree

In what could be read as a jab or perhaps a tribute to ex-foe Paris Hilton, Lohan plays a spoiled hotel heiress who is incapable of doing anything for herself. Her father is pressuring her to finally accept the realities of the working world while her vapid influencer boyfriend is pressuring her to get married. But when an accident leaves her with amnesia, she’s taken in by a warm-hearted local widower (Glee’s Chord Overstreet) and she starts to realise that there’s more to life than being fed caviar by poorly paid servants.

As well as recalling every single one of these movies that’s come before it, Falling for Christmas most obviously echoes the setup of 1987’s Overboard with Lohan subbing in for Goldie Hawn. But while that film leaned into the character’s selfishness and cruelty before the loss of memory, co-writers Jeff Bonnett and Ron Oliver are a little too tame to make the character even vaguely unlikable and so the transformation from diva to “person who now likes to bake for others” holds less juice. It would have been fun to see Lohan, whose reputation for being difficult precedes her, play into such expectations but, rather like Jennifer Lopez’s similarly milquetoast riches-to-rags romcom Marry Me from earlier this year, there’s a wariness to the characterisation that avoids even the slightest bit of gristle. It’s all sugar and no salt.

Anyone familiar with the formula will be aware of an uneasy regressiveness to the lead female’s character arc which usually sees her soften from a tough city career woman to a supportive small-town housewife, from selling stocks to selling cookies. It might not be quite as severe here but the film does still see cooking, cleaning and caring for a gilet-wearing man with a beard as character development. It doesn’t help that said man is played with maximum blandness by the vanilla-flavoured Overstreet, who melts to slop on screen next to Lohan, easing back into the spotlight like a pro. Yes, it would be far more gratifying to see the star grapple with a role that required even 30% of her talent but it’s a low-stakes, medium-reward return that should hopefully prove the basics (can turn up on time, can show emotions) to those questioning her legitimacy. She has another Netflix romcom in the can but hopefully will level up soon after.

A film like Falling for Christmas doesn’t try or need to break the mold, it doesn’t even need to be that good, it just need to be low-level competent and as these films go, it’s just about passable enough for those who tend to start getting excited about the festive period at least two months early. The film will fade from one’s mind before the big day even arrives but hopefully Lohan’s return will be the gift that keeps on giving.