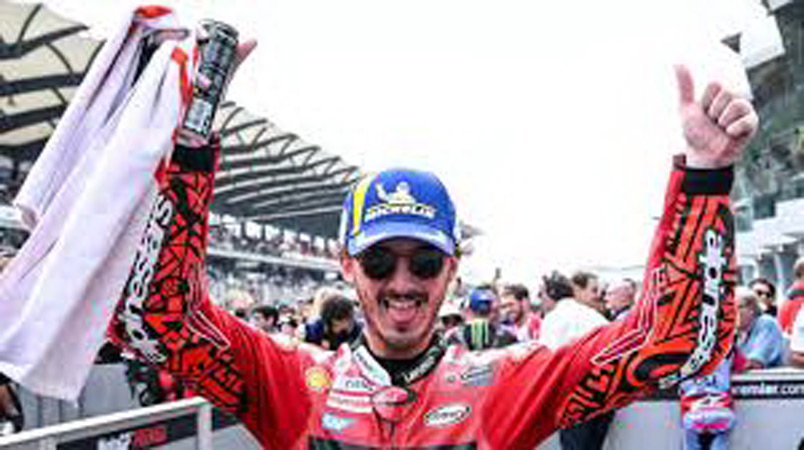 VALENCIA: Francesco Bagnaia claimed the MotoGP crown in the season-ending Valencia Grand Prix on Sunday to pull off the greatest title turnaround in the championship’s history. The Ducati rider, who trailed outgoing champion Fabio Quartararo by 91 points mid-season, completed his astonishing comeback with ninth place behind race winner Alex Rins. “World champion – it sounds good” beamed Bagnaia, universally known as ‘Pecco’. “That was the hardest race of my life,” the 25-year-old added. “I was struggling. My aim was to be in the top five, but I started to struggle after a few laps, but the most important thing is we are world champions.” Among those rushing to congratulate him was his mentor, Italian motorcycling legend Valentino Rossi, the last Italian to win the MotoGP title in 2009. Also on hand was Giacomo Agostini, who was the last Italian to take the championship on an Italian bike 50 years ago. Ducati’s last world championship came back in 2007 courtesy of Casey Stoner. Back in June, Quartararo looked sure to defend his crown after success in Germany.

His subsequent collapse was painful for his fans as Bagnaia reeled in the Frenchman with the help of four consecutive wins to take a 23-point lead going into the season-finale in Spain. That left the French rider needing to win, and Bagnaia finish out of the top 14, to retain his crown, a mission that was to prove impossible. Quartararo could only muster fourth behind Rins, who was supplying Suzuki with a fairytale result in their MotoGP swansong with the Japanese constructor pulling the plug on their MotoGP involvement. KTM’s South African rider Brad Binder and pole-sitter Jorge Martin, a Spaniard on a Ducati Pramac, completed the podium.