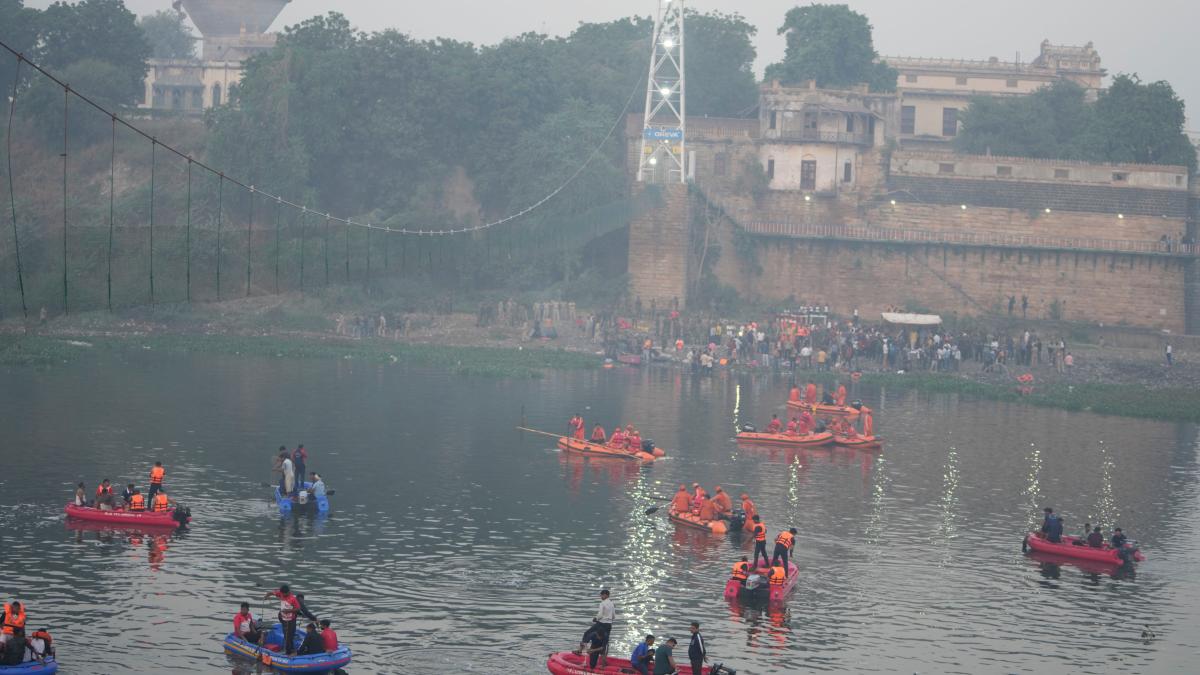 The death toll has risen to at least 130 after a colonial-era pedestrian bridge collapsed in India, sending scores of people tumbling into the river below, police said Monday.

Authorities said nearly 500 people, including women and children, were celebrating a religious festival on and around the nearly 150-year-old suspension bridge in Morbi in western India when cables supporting it snapped soon after dark on Sunday.

This brought the rickety structure in the state of Gujarat crashing into the river, spilling scores of people into the water while others clung desperately to the wreckage.

“The death toll now stands at 130,” Morbi superintendent of police Rahul Tripathi told AFP, adding that around 15 other people were being treated in the hospital.

The bridge over the Machchhu river around 200 kilometres (120 miles) west of Gujarat’s main city, Ahmedabad, had only reopened several days earlier after months of repairs.

“People fell on top of each other after the bridge collapsed,” one witness told local media. “People had flocked to the bridge for rituals and because of the Diwali festival. Many children and women were among the victims.”

News reports showed videos — which could not be independently verified — of people hanging on to what remained of the bridge or trying to swim to safety in the dark.

P. Dekavadiya, the head of police in Morbi, told AFP by phone that more than 130 people had been rescued.

The suspension bridge, 233 metres (764 feet) long and 1.5 metres wide, was inaugurated in 1880 by the British colonial authorities and made with materials shipped from England, reports said.

Broadcaster NDTV reported that it reopened on Wednesday after seven months of repairs despite not having a safety certificate and that video footage from Saturday showed it swaying wildly.

Authorities quickly launched a rescue operation following the collapse, with boats and divers deployed to search for missing people late into the night.

Dozens of soldiers from the Indian Army and Navy were also called for the rescue operation.

Authorities were planning to stop water supply to the river from the nearby check dam and use pumps to de-water the river to speed up the search operation.

Prime Minister Narendra Modi, who was touring his home state of Gujarat at the time, announced compensation for those killed and injured in the accident.