A ‘Hitler with zero achievements’ 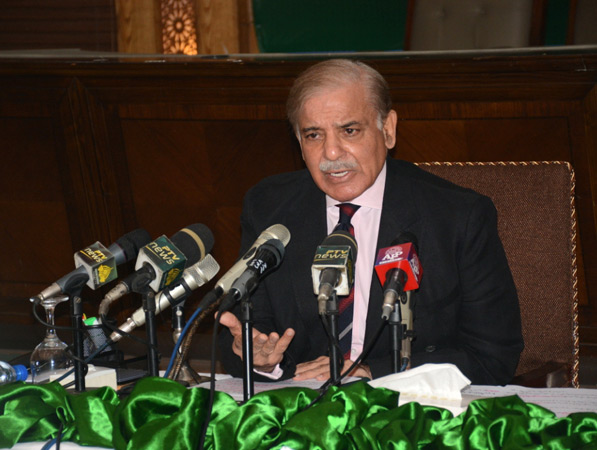 Prime Minister Shehbaz Sharif on Sunday said that it was the responsibility of the elected coalition government to ensure stability in the country and would not allow anyone to create political and economic crises.

Referring to Pakistan Tehreek-e-Insaf’s long march, the prime minister reiterated that any wrong attempt to enter the Red Zone would be thwarted under the relevant laws.

During his interaction with UTubers, the prime minister said that PTI’s leader Imran Niazi had the sole personal agenda, and he was hell-bent to push the country into turmoil and economic destruction for the achievement of his vested interests. “Expect everything from the person. Unfortunately, Imran Niazi’s thinking revolves around his personal vested interests. Even he did not spare his close friends who were sidelined,” he added. The prime minister observed that PTI’s leader even did not spare the institution that had been rendering unmatched sacrifices for the protection of the motherland and was out to malign it to the pleasure of enemies of Pakistan including India. India was now portraying him (IK) as their hero, he added.

The prime minister said that unfortunately, once again a long march and sit-in was announced by the PTI’s leadership when he would be visiting China and recollected that during President Xi’s visit in 2013 similar sit-in was staged, dirty clothes were hanged on the premises of buildings in the Red Zone and roads were littered with garbage. The then-Chinese Ambassador met the PTI chief and requested him to vacate the place for a few days during the visit but he refused. For seven months, the visit was postponed which had also shaken the trust of the country’s friends, he added. The prime minister said that the close party leaders of PTI were claiming that the long march could be turned bloody. The PTI’s government had left the country’s economy in tatters and the current government was striving to build it from the straw, he added. The prime minister said that during their rule, not a single penny of corruption could be proved whereas in the PTI’s tenure, through sugar and wheat scams, people made from the windfall. The low-priced gas during the Covid period was not imported. What kind of relief the PTI’s chief had provided to the masses? The prime minister questioned and said that there could be no two opinions that Imran Niazi had the ‘narcissist agenda’. In the past, he had inflicted irreparable loss to the country which was not relevant to him considering his personal agenda. The prime minister said that the coalition government was grappling with the issues of unemployment and price hike worsened by the rising global oil prices.

The prime minister to a question, replied that a person had brought a message from the PTI’s chief suggesting consensus over the appointment of new army chief which was rejected by him as it was the prerogative of the Prime Minister to make such appointment under the Constitution. Expressing his displeasure over the haughty attitude of the former prime minister, he said that Imran Niazi even did not like to shake hands with his political opponents in the Parliament. Whether they had approached him when the PTI’s government made amendment over the army chief, he said, adding that he told the messenger that he was ready for a dialogue to avoid crises, and to discuss the charters of economy and democracy. But the appointment of a new army chief was a constitutional matter, and he told the messenger pointblank that he would not hold consensus with Imran, he said, adding that as prime minister he would take decision in the best interests of the country. “Was the vote of no confidence unconstitutional or unlawful?” he questioned when prompted by a YouTuber to comment on Imran’s criticisms targeting the government. “The facts that were revealed lay bare the truth that to make the vote of no confidence unsuccessful, Imran Niazi had said that in return you may get as long an extension as you like,” added PM Shehbaz referring to DG ISI’s claims that the PTI chief had offered the Chief of Army Staff (COAS) Qamar Javed Bajwa an indefinite extension to his tenure in return for saving his government from ouster. The PM expressed his horror over the thought that an “offer is being made to end a parliamentary matter in an unconstitutional manner”. “Imagine a person spews venom about an institution that had nurtured him,” he continued. “I believe that the institution [military] had set aside all barriers that perhaps Pakistan would prosper through this man and gave him such support that neither did anyone receive in the past 75 years nor would they ever after him,” he added. “And on a lighter note, I say, if we had even gotten 20 per cent of the support he has gotten, then under the leadership of Mian Nawaz Sharif, Pakistan would have gone up like a rocket,” said the PM “and yet that man [Imran] failed despite all these pushes.””A beat-up old car starts running after a few pushes,” he explained “but this car, even after all these pushes did not run.” “And then this man pushes that institution for his own selfish reasons,” criticised PM Shehbaz, “he maligns the COAS, gets statements from Shehbaz Gill and [Azam] Swati, and maligns the institution in the most despicable of words, then [how] can any sensible Pakistani stand that?” “And then fine, you criticise a person, but then to go on to [talk about] their families, not even sparing their children,” he added, “not even an animal does that.” During the meeting, the PM also compared Imran with Adolf Hitler in that the latter too had succeeded in gaining a significant following like Imran’s “cult”. “But even then, at least Hitler had actually managed to achieve some things” he noted counting the construction of industries and the “world famous” German high-way system – the Autobahn – amongst them “before he destroyed it all with his own hands because he was a fascist”. “So he had at least achieved something, but you don’t even have a single thing to your name,” he said addressing the PTI chief. The PM claimed that this was the reason that in his rallies and political sit-ins Imran was “unable to share anything about his own performance” and so all he could do was “call others thieves and robbers”. Even though, he said Imran himself “turned out to be “the biggest embezzler of all”, as he referred to the Toshakhana (gift depository) reference verdict.