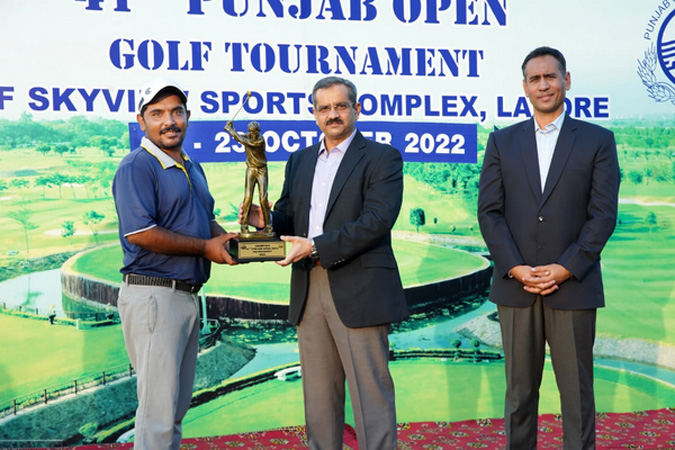 LAHORE: The three rounds and 54 holes 41st Punjab Open Golf Championship came to a most pleasing conclusion for Mohammad Ashfaq, a golf professional of Karachi Airmen Golf Club, at PAF Skyview Golf Course here on Sunday. Ashfaq outclassed colossally talented golf professionals like Shabbir Iqbal, Matloob Ahmed, Ahmed Baig and a few others to achieve overwhelming victory in the championship. At the start of the final round yesterday, Ashfaq, who has yet to attain the leading light status in the national golf arenas of Pakistan, was placed one stroke behind three leaders — Shabbir, Matloob and Shahid — and not many predicted that the ultimate winner will be someone other than Shabbir or Matloob or even Shahid. But the purposeful and resolute Ashfaq had other plans. And when the final 18 holes came to an end, his score of gross 67 represented an illuminated effort, giving him a commendable aggregate score of 206, ten under par plus elevating him to the star status of the title bearing event and compelling four other bright ones to accept the consoling runner-up second position. Shahid, Matloob, Tallat Ijaz and A Zahoor were bracketed aggregate score of 208, two shots behind Ashfaq.