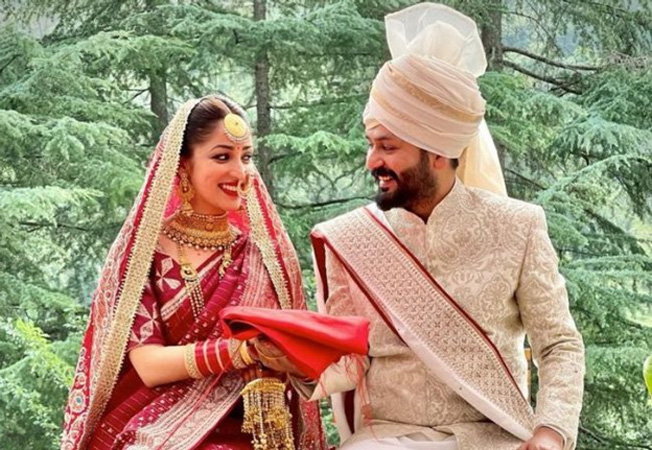 Actor Yami Gautam, who is married to director Aditya Dhar, responded to a Twitter user who asked her about her wedding plans. Recently, Yami held an Ask Me Anything session on Twitter and interacted with fans. Yami tweeted, “Hey guys! It’s been a while since we caught up on Twitter. Let do an #AskYami session at 6 this evening.”

A person asked her, “#AskYami aap shaadi kab karogii (When will you get married)?” Sharing a picture from her wedding with Aditya Dhar, Yami wrote, “Hain (What)? (thinking face emoji).”

Several fans were left in splits. A person wrote, “Maybe he meant if dusri shadi ka koi chance kabhi (Maybe he meant about chances of second marriage)?” Another fan wrote, “Best Bollywood couple IMO. Got married with simplicity and followed our traditions.” A person also joked talking about Yami’s wedding, “Ye original thi? Mujhe laga ye shooting ki hai! Aap ne mera dil thod diya (This was the original one? I thought it’s a scene from a shooting. You broke my heart).”

Yami held an Ask Me Anything session on Twitter and interacted with fans. Yami tied the knot with Aditya in a private ceremony on June 4, 2021, in Himachal Pradesh. A few months ago, the couple went on a spiritual tour and visited a few temples in Himachal Pradesh. Visiting the Jwala Devi mandir in Shimla, Yami shared photos on Instagram and wrote, “The spiritual feeling after Darshan at Jwala Devi mandir is inexpressible.” Yami and Aditya also visited the Naina Devi temple and performed puja. She wrote, “Took blessings at the divine Naina Devi mandir in my Dev Bhoomi Himachal.”

The duo previously worked together in the 2019 war-action drama Uri: The Surgical Strike. Yami made her Bollywood debut with Vicky Donor and since then has featured in several movies, including Kaabil, Sanam Re, Bala, Ginny weds Sunny and A Thursday.

Yami was last seen in Dasvi alongside Abhishek Bachchan and Nimrat Kaur. Yami will next be seen in Aniruddha Roy Chaudhary directorial Lost alongside Pankaj Kapur, Rahul Khanna, and Neil Bhoopalam. She will also be seen opposite Akshay Kumar in Oh My God 2.