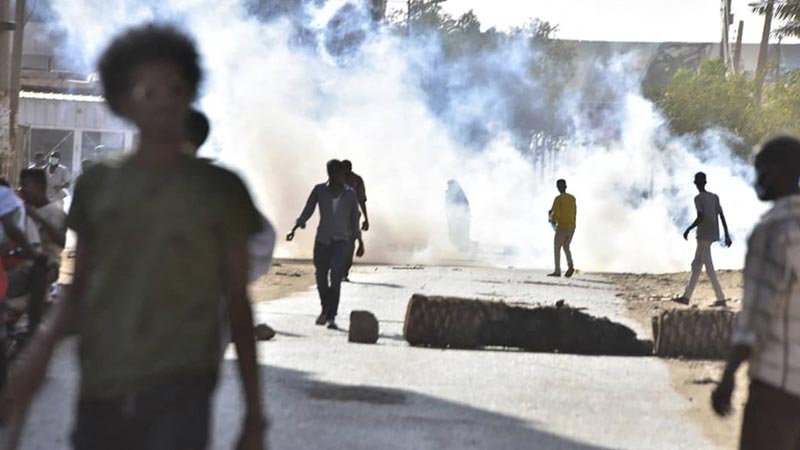 A determined climate campaigner for nearly a decade, both at home and on the world stage, she speaks passionately of the growing threat a heating planet poses to her northeast African nation.

Elsaim who joined the protests which toppled longtime president Omar al-Bashir in 2019 and now favours a return to civilian rule following a military coup in 2021 argues that urgent environmental action must go hand in hand with political change.

Sudan is the world’s fifth most vulnerable country to the impacts of climate change, according to a 2020 ranking in the Global Adaptation Index, compiled by the Notre Dame University in the United States.

“There has also been a noticeable increase in temperature,” said Elsaim about her arid country. “There is no winter anymore.”

The war-ravaged nation has been hit hard in recent years by erratic weather patterns harsh droughts and boiling temperatures followed by torrential rains.

Egypt, which borders Sudan to the north, will from November 6 host the 27th Conference of the Parties to the UN Framework Convention on Climate Change.

For Elsaim, named chair of the UN Youth Advisory Group on Climate Change in 2020, it is an opportunity to ring the alarm bell on the climate impacts her youthful country faces — 62 percent of Sudan’s 45 million people are aged under 30, according to UN figures.

Sudan is already struggling from what experts and activists say is the results of shifting weather patterns: worsening conflicts over scarce land and water resources.

Increasing demands on dwindling natural resources has fuelled inter-ethnic conflicts, including the 2003 war that erupted in the arid western region of Darfur.

“Such conflicts are caused primarily by scarcity,” said Elsaim, who has a degree in physics and a masters in renewable energy from the University of Khartoum.

“And the reason for said scarcity is climate change.”

In Darfur, the war pitched ethnic African minority rebels against the Arab-dominated government of hardline president Bashir, who responded by unleashing the notorious Janjaweed militia.

The war in Darfur would leave about 300,000 people killed and 2.5 million displaced, according to the United Nations.

Then UN secretary-general Ban Ki-moon, writing in The Washington Post in 2007, argued that “amid the diverse social and political causes, the Darfur conflict began as an ecological crisis, arising at least in part from climate change”.

Organisations such as the International Committee of the Red Cross note that climate change “exacerbates existing social and economic factors that may lead to conflict”, while at the same time, insecurity can “limit people’s ability to cope with climate shocks”.

Elsaim says the authorities have given little attention to climate change.

As COP27 approaches, she remains committed to doing what she can to make change even while admitting progress from previous climate summits she has attended has been “very small”.

“Though the small progress will not save us,” she said, “it’s still better than nothing.”