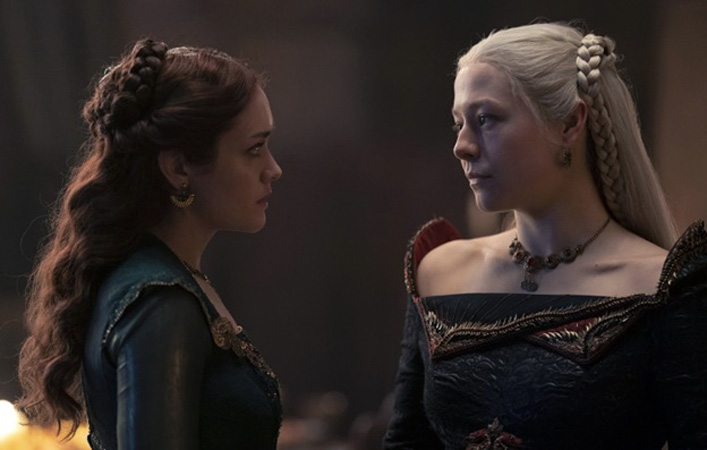 In a TikTok video posted by HBO Max Oct. 1, Olivia Cooke, who plays the adult Queen Alicent Hightower on the new Game of Thrones prequel series House of the Dragon, asks her co-star Emma D’Arcy, who portrays the character’s nemesis, Princess Rhaenyra Targaryen, to name their “drink of choice.”

D’Arcy replies, “A Negroni,” to which Cooke responds, “I was going to say the same thing.”

D’Arcy continues, “Sbagliato.” Cooke replies, “Oooh!” and her co-star adds, “With prosecco in it.”

The clip has gone viral, with many viewers fascinated not only by D’Arcy’s unconventional answer but also mesmerized by their signature calm tone.

“The voice my friends,” commented one user, “the voice.”

Another person replied, “Their voice is what velvet sounds like.”

In an interview with The New York Times, posted Oct. 12, D’Arcy spoke about the viral clip about their favorite cocktail. “I keep thinking I should tell my mum that I’ve become a meme in the hope that she’ll be happy for me,” the star said, “but I’d have to explain what a meme is, and I’ve decided it’s too much effort.”

D’Arcy continued, “I feel so embarrassed. Because in those interviews, when we’ve been at it for six hours, I’m honestly only trying to make Olivia laugh.”

Cooke, sitting by her co-star, then laughed, “Is that right?” she asked.

D’Arcy then joked, “No, I’m obviously doing Campari’s next campaign.” Cooke then said, “I’d be like, ‘Ten million pounds, please!'”

The drink’s name reportedly first came about when a bartender grabbed proscecco instead of the spirit as he was making a negroni. In fact, the magazine notes, you don’t need to specify to put “prosecco” in a Negroni Sbagliato, as it’s already implied.

So pour one out for another regal character viewers said farewell to last weekend on House of the Dragon, and perhaps enjoy another one this Sunday when the HBO series returns for its second-last episode of its debut season.