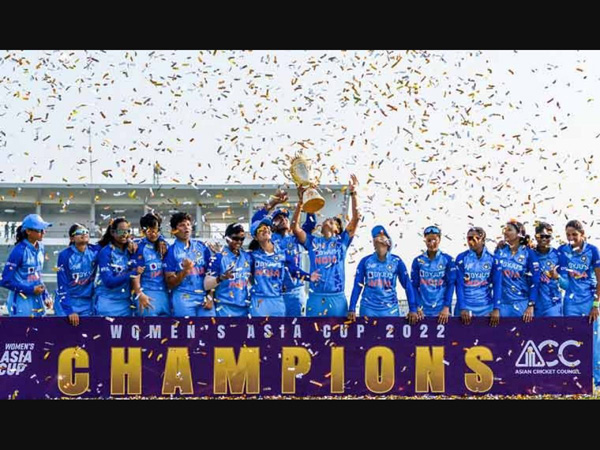 SYLHET: India dominated from start to finish to win their seventh Women’s Asia Cup title, beating Sri Lanka by eight wickets in the final in Sylhet, Bangladesh. Smriti Mandhana, who blazed her way to her first half-century in the competition, and captain Harmanpreet Kaur completed the paltry 66-run chase in the ninth over. Sri Lanka’s 65 for 9 is the lowest total by a side batting first and playing out the full 20 overs in a women’s tournament final. India chased it down with 69 balls to spare, which constitutes another record in a women’s T20I title clash. Renuka Singh had a hand in four of Sri Lanka’s first five wickets, finishing with 3-1-5-3 and the run-out of the captain Chamari Athapaththu. Sneh Rana and Rajeshwari Gayakwad took two wickets each.

Only a defiant last-wicket partnership between Inoka Ranaweera, who top-scored with her unbeaten 18, and No 11 Achini Kulasuriya helped them avoid getting bowled out. By then the Indian fielders had surrounded the batters in close catching positions, with Harmanpreet deploying only two or three fielders outside the circle. The final attracted the biggest crowd of the tournament – about 10,000 or so – to the picturesque Sylhet International Stadium. But before half of them had even taken their seats, India had reduced Sri Lanka to 9 for 4 in the fourth over.

The Indian bowlers’ accuracy stood out in the game. Sri Lankan openers Athapaththu and Anushka Sanjeewani couldn’t get going, with the first two overs going just for seven runs. In the third over, Athapaththu ran for an almost impossible single after dabbing the ball to short third and was well short of her crease when the throw came in, departing for 6. The implosion came in the next over. Renuka had Harshitha Samarawickrama caught behind before Sanjeewani got run-out next ball. A slight mix-up in the middle of their quick single meant that Pooja Vastrakar’s throw from midwicket caught Sanjeewani short. Renuka completed the team hat-trick next ball when Hasini Perera chipped straight to Mandhana at cover. With Sri Lanka already reeling, Renuka bowled Kavisha Dilhari with an in-ducker in the sixth over. 16 for 5 became 25 for 7 when Gayakwad and Rana joined in the wicket-fest shortly afterwards. Gayakwad bowled Nilakshi de Silva for 6. Rana then collected a soft dismissal: Malsha Shehani inside-edged one back to the bowler, the ball looping and landing back into the hands from where it had come. Gayakwad and Rana added one more wicket, getting both Oshadi Ranasinghe and Sugandika Kumari bowled.

After a quiet first over, Mandhana hit Kumari through the covers for the first boundary. Next over, she lifted Ranasinghe over extra cover for a six, following it up with a swivel pull through backward square leg for four. Mandhana then greeted Ranaweera with a lofted hit over mid-on for a six, before Shafali Varma fell trying a big hit, getting stumped for five. Jemimah Rodrigues fell trying to slog Dilhari, but Mandhana kept going having found her fluency. She struck Dilhari for successive fours in her next over, through cover and point, and completed the chase with a six over midwicket. That shot also brought up a half-century for the India vice-captain, off just 25 balls.