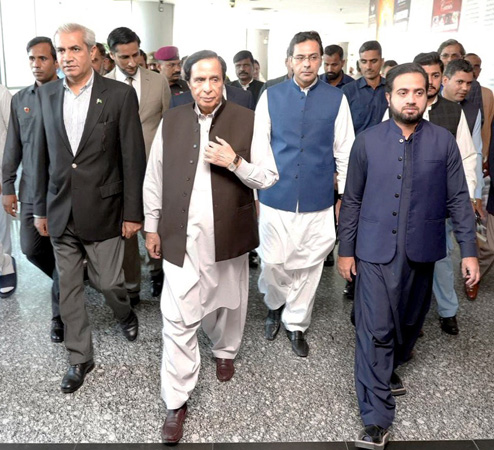 The CM in his special message on the International Day of Rural Women said that the rural women play the role of a vanguard to increase agricultural production besides ensuring food security. He stated that the important role of women cannot be overlooked in strengthening the rural economy. He lauded that the rural women by working shoulder to shoulder with the men in the fields contribute their significant part in strengthening the rural economy adding that time has come that the rural women should be granted their due rights. He highlighted that our government is actively working for the progress of rural women and for the protection of their rights.He maintained that taking steps to bring betterment in the state of affairs of the rural women is our responsibility. CM emphasised that we have to improve rural infrastructure and services so as to simplify the inclusion of women in the social, political and economic activities. He underscored that we have to pay attention to improve the educational institutions and hospitals in the rural areas. CM stated that inclusion of rural women is essential in the matters of legislation and decision- making at the local and national level. He stressed that it is the need of time to eliminate torture and discriminatory behaviour on gender basis. CM outlined that today we have to admit as a nation the positive role being performed by the rural women for the development and progress of a society adding that we reiterate our resolve that we will take more effective steps for the provision of rights to the rural women.

CM inaugurates Go Punjab App: Chief Minister Punjab Chaudhry Pervaiz Elahi formally inaugurated the ‘Go Punjab’ App at the Punjab Information Technology Board. Former Federal Minister Moonis Elahi, Provincial Minister for Information Technology Dr Arsalan Khalid, Adviser to CM on Home Omar Sarfaraz Cheema, Secretaries of concerned departments and the senior officials of PITB were also present on the occasion.CM while addressing the launching ceremony of ‘Go Punjab’ app said that the Punjab Information Technology Board has served different departments in a short span of time and has achieved a big milestone by making an app. He said that when he had assumed the office of the Chief Minister then the province had no department of Information Technology. He disclosed that he had established the Information Technology department in 2005 and laid the foundation stone of IT Tower on 3rd July 2006. The place where we are now had a vegetable market situated earlier. We shifted the poor people working at this place to some other place and provided them with livelihood. He apprised that we will make a 600 bedded hospital and an emergency on the adjacent land of IT Tower. We have also chalked out a plan to make a helipad to shift the injured in case of any accident occurring at the Motorway or at the Ring Road. Our projects are for the future and their benefits will reach the common man. He stated that he had also started the number plate projects of the vehicles in 2005 and sent for the number plates model from California. Unfortunately Shehbaz Sharif after coming into power soon stopped the work on IT Project like my other projects. The Chairman P&D of that time Salman Ghani apprised Shehbaz Sharif that the building of this project had been given to the Chinese government on a contract. The Chinese government had filed a case against the Punjab government at that time and due to the incompetence of Shehbaz Sharif the Punjab government had to give rupees 41 crore and then that project started. He said that he tried to get back rupees 41 crore through the court . It was a great misfortune that the project had to incur a loss of rupees 41 crore due to Shehbaz Sharif. CM said that the common man will be greatly benefitted with the facility of ‘Go Punjab’ app and will eliminate bribery with the provision of online services.