Rakul calls out her brother publicly for leaking her wedding news! 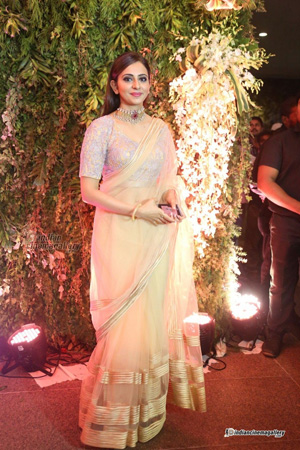 Rakul Preet Singh announced her relationship with Jackky Bhagnani early this year and they are madly in love. Over the past few months, the couple have been spotted together several times and often leave lovey-dovey messages on each other’s posts. However, while fans have been awaiting an update on their marriage, Rakul’s brother dropped a hint that went viral, and the diva has called out to him publicly on Twitter.

Recently an unnamed source stated, “Shaadi 2023 mein hogi aur yeh pucca hai. Aakhir dono ko ek doosre se inteha pyaar hai aur dono shaadi mein vishwas rakhte hain (The wedding will happen in 2023 and that’s for sure. After all, both of them love each other and both believe in marriage).”

And to confirm the news, Etimes contacted Rakul Preet’s brother, Aman Preet Singh, to which he reacted, “Rakul has acted in a couple of projects by Jackky Bhagnani. Marriage is obviously on the cards, but nothing is concrete yet. She will announce it on her own when she decides to get married. I would know if it was happening. Marriage is the climax of any relationship. Jackky is one of the top producers of Indian cinema, and he has lots of ambitious projects in mind; in fact, both of them are very busy people. So, they have their own goals.”

And quite recently, taking to Twitter, Rakul quizzed her brother why she had no clue about her own life. “@AmanPreetOffl, you confirmed? Aur mujhe bataya bhi nahi bro (You did not even inform me, bro).. It’s funny how I don’t have news about my life,” she wrote in a banter.