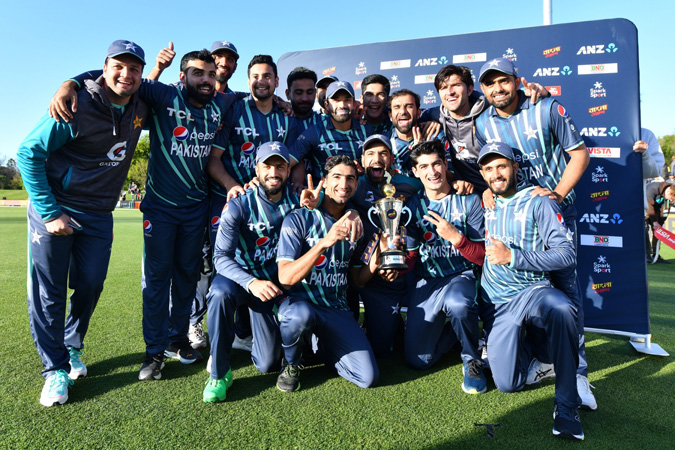 CHRISTCHURCH: All-rounder Mohammad Nawaz helped Pakistan to a five-wicket victory over New Zealand on Friday to win the tri-series Twenty20 final in Christchurch with three balls to spare. It was a good sign for Pakistan going into the World Cup in Australia, with an opener against arch-rivals India on October 23. After the hosts finished on 163-7 at Hagley Oval, spinner Michael Bracewell checked Pakistan’s early momentum in the tourists’ reply, before Nawaz stepped up with his decisive 38 off 22 balls. Haider Ali also made a useful 31 off 15 balls. Having also steered Pakistan out of trouble in Thursday’s dead-rubber win over Bangladesh, Nawaz produced another stellar innings before Iftikhar Ahmed sealed victory with a six in the final over. The Black Caps — World Cup finalists last year — started well with captain Kane Williamson the top-scorer with a masterful display of stroke play to chalk up 59 off 38 balls. The hosts flew out of the traps with Finn Allen hitting three fours before he was caught by Naseem Shah for 12 off six balls.

Williamson came in to settle nerves with his first half-century in any format in 2022 after struggling for form following an elbow injury. “It was a great game, Pakistan are a strong side and all credit to the way they turned the game’s momentum,” said Williamson. “There was a lot of good in it, but it was frustrating not to get over the line.”

In reply, formidable Pakistan openers Babar Azam and Mohammad Rizwan smashed Tim Southee, on his 100th T20 international appearance, for nine runs in the opening over, then hit Trent Boult for 10 in the second. Bracewell then intervened and grabbed the wickets of Azam and Shan Masood, and Ish Sodhi trapped dangerman Rizwan lbw for 34 runs off 29 balls. But just as he did against Bangladesh, Nawaz came to the crease to wrestle back control of the match. Iftikhar’s towering six with three balls left clinched victory in style.