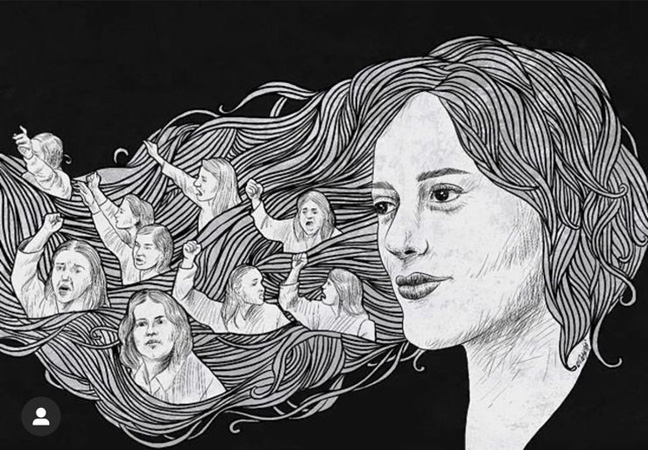 Protests are sweeping Iran with calls of justice for Mahsa Amini, a young woman who died in the custody of Iranian morality police and more and more people are expressing their support for the cause. But people aren’t on board for those who stay silent in the face of oppression at the hands of their own government showing support now notably French actors, Bollywood star Priyanka Chopra and Israeli women.

The protests in Iran are against the government forcing women to cover their heads and inflicting violence on them in cases where the arbitrary dress codes are broken. As an act of resistance, many Iranian women are chopping off their hair and it’s led to token acts of support in the form of celebrities snipping off a lock of their hair on camera or posting about the protests. Chopra shared a picture and post about the movement but people were quick to point out that she has never spoken about the oppression of Muslim Women in India and India-occupied Jammu & Kashmir.

On Monday, she shared a photo on Instagram with her thoughts on Iranian women. “The voices that speak after ages of forced silence, will rightfully burst like a volcano! And they will not and MUST not be stemmed,” she wrote while expressing how she’s in awe of the courage and purpose.

The “Bajirao Mastani” actor added that it’s not easy to risk your life in order to “challenge the patriarchal establishment” while fighting for your rights. She also weighed in on the matter that people need to join in for their collective voiced to be heard as numbers matter. “I stand with you. Jin, jiyan, azaadi… Women, life, freedom,” she concluded.

But soon after her Instagram post, Chopra was called out on social media for not raising her voice for the Muslim women in her own country. One user said in the southern Indian state of Karnataka where Chopra is from Muslim women are fighting for their right to wear hijabs.

It’s not just Chopra though. People are pointing fingers at TV anchors in India trimming their hair in solidarity with Iranian women. Journalists are questioning the hypocrisy in celebrities staying silent on women being denied their right to wear hijab in India but supporting the choice of Iranian women to not wear the hijab. A journalist shared a video of BJP MP Parvesh Verma and called out Indian celebrities for “speaking about Iran” but looking the other way when “fascism and apartheid” is taking place in their home country.