* 'Baby girl Pelphrey coming 2023,' she shared on Instagram. "beyond blessed and over the moon… I [heart] you @tommypelphrey !!!' 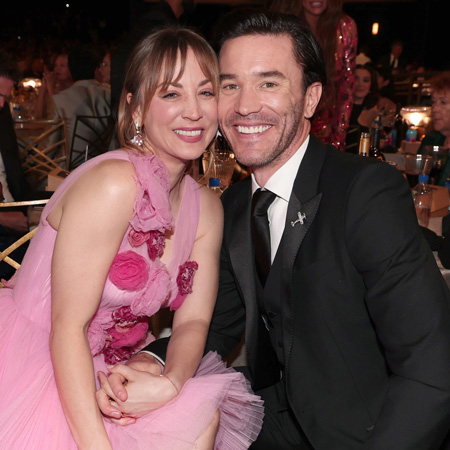 Kaley Cuoco and Tom Pelphrey are about to take flight into parenthood. The Big Bang Theory alum and the Ozark actor announced on social media Oct. 11 that they are expecting their first child together.

“Baby girl Pelphrey coming 2023,” she shared on Instagram. “beyond blessed and over the moon… I [heart] you @tommypelphrey !!!”

Tom shared photos of the couple kissing and slicing into a pink sex reveal cake. “And then it was even MORE BETTER,” he captioned the gallery. “Love you more than ever @kaleycuoco.”

The couple’s pregnancy announcement comes six months after they met at the Ozark premiere in April. Kaley, 36, said she and Tom, 40, were set up by their manager and the sparks were apparent during that first interaction.

“I heard his voice, and I turned around, and it was like my life was over, or just starting. It hit me. It was love at first sight,” she told USA Today in May. “We were immediately connected. I do feel like I’ve known him my whole life, but I wasn’t ready for him.”

Kaley added, “We’re ready to build a life together.”

Four months later, the couple made their red-carpet debut at the 2022 Emmys. Kaley was nominated for Lead Actress in a Comedy Series for her role in the Flight Attendant and Tom received a nod for Outstanding Guest Actor in a Drama Series for his role in Ozark.