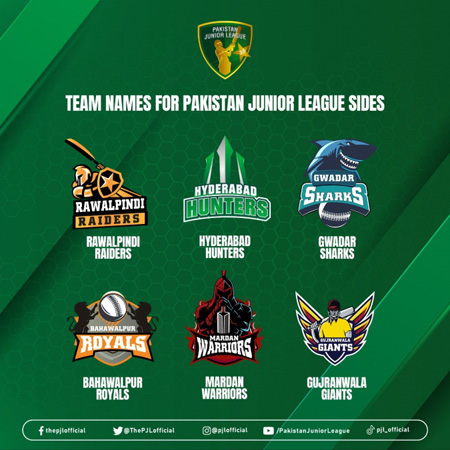 LAHORE: The inaugural edition of the Pakistan Junior League begins in less than a week’s time (Thursday October 6) at Gaddafi Stadium Lahore. The teams will be beginning their preparations for the tournament this weekend. Before the conclusion of the PCB Pathway Programme earlier this week —- almost all local PJL players were involved in the programme, the captains spoke about their excitement of playing the PJL, captaining their side and the life time opportunity of working with some of the greats of the game who are involved as mentors in the league. The mentor roster includes legends of the game Javed Miandad (league mentor), Imran Tahir (Bahawalpur Royals), Shoaib Malik (Gujranwala Giants), Sir Vivian Richards (Gwadar Sharks), Daren Sammy (Hyderabad Hunters), Shahid Afridi (Mardan Warriors) and Colin Munro (Rawalpindi Raiders). The teams will practice for four days leading up to the tournament opener between Gujranwala Giants and Mardan Warriors which will be played from 8:00pm next Thursday. The 19-match tournament will be played on a single league basis with the six teams competing against each other once. The top four sides will compete in the playoffs, the final will be played on Friday, October 21.

Captain Bahawalpur Royals Obaid Shahid said: “Being picked and then named captain of Bahawalpur Royals is nothing less than a dream coming true. I am determined to make an impression in the tournament and lead my side with grit, determination and passion. This league is an incredible opportunity for all of us and we are all excited to participate. Our team mentor is Imran Tahir who despite his age remains one of the fittest players around.” Captain Gujranwala Giants Uzair Mumtaz said: “I was overjoyed at my selection for the PJL and the honour of captaining Gujranwala Giants. My parents and family is really happy for me and are praying for my success. Our mentor Shoaib Malik is a legend of the game and his presence will mean a lot to us.”

Captain Gwadar Sharks Shamyl Hussain said: “It was a big honour to get chosen for the Sharks and then being named the captain was the icing on the cake. I am really excited to deliver for my team as a player and captain. Having a mentor like Sir Vivian Richards is absolutely incredible, his presence alone will make a big impact in our dugout and we will learn a great deal from his experience and stature in the game.” Captain Hyderabad Hunters Saad Baig said: “I am thrilled to captain the Hyderabad Hunters in the Pakistan Junior League. I have made steady progress at the age-group level and this opportunity will help me improve my game further while competing with some of the best U19 talent from around the world. Our team mentor Daren Sammy is a T20 World Cup winner and has legendary status in the T20 format, we are all looking forward to learning from his vast experience.”

Captain Mardan Warriors Abbas Ali said: “My family was overjoyed with my selection in the Mardan Warriors team. Captaining the side in the Pakistan Junior League is a fantastic opportunity for me and I want to give my absolute best in the tournament. Shahid Afridi’s presence as Mardan’s team mentor will be hugely beneficial for us.” Captain Rawalpindi Raiders Habibullah said: “I am delighted to captain the Rawalpindi Raiders in the Pakistan Junior League. Our team mentor Colin Munro has played T20 cricket around the world and made a big name, as a batter, I am really keen on learning the art of T20 batting from him.” agencies