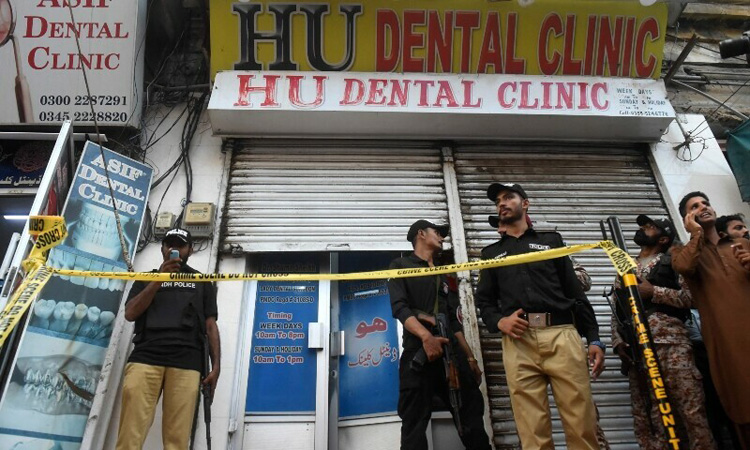 In a targeted attack in Karachi’s Saddar area, a Chinese national was killed while two others were injured, police officials said on Wednesday. Speaking at the scene of the crime, SSP South Asad Raza told reporters that one person was killed and two people were injured who were shifted to a hospital for treatment. He confirmed that the three were Chinese people. He said at around 4:05pm, an unidentified person posing as a patient came to the private dental clinic of Dr Richard Hu near Preedy Street and sat in the waiting area for tooth treatment. “After about 15 to 20 minutes, he entered the clinic area and opened fire on Dr Richard Hu, his wife Mrs Phen Teyin and Ronald Raymond Chou with a 9mm pistol,” he said. “The assailant was wearing a red cap and was clad in dark blue trousers and shirt,” Raza elaborated, continuing that the suspect managed to escape from the crime scene with help of his accomplice who had parked his motorbike around the corner of Preedy Street towards M.A. Jinnah Road. As a result of the firing, Dr Richard and Phen Teyin sustained bullet injuries, while Ronald, who was their employee, passed away on the spot.

“Reportedly, Dr Richard H is running a private clinic in this area of Karachi for more than 40 years and the three victims held dual nationality of China and Pakistan,” the official added. Raza said that the police responded to the emergency in time and cordoned the area for the collection of evidence. “The CCTV of the clinic and nearby shops have been obtained and is being processed for identification of the assailant.”

Geo-fencing of the area was also undertaken to obtain important clues about the incident, he said. The investigation of the incident will be carried out by the Counter-Terrorism Department. “At this stage, the motive of the incident remains unclear whether the victims were targeted owing to personal reasons or it was a terrorist attack,” opined SSP Raza, adding that further investigation was underway.

Police surgeon Dr Summaiya Syed said at around 4:38pm, Ronald Raymond Chou, 32, was brought dead to the Dr Ruth Pfau Civil Hospital Karachi. He had suffered two fatal bullet injuries on his neck and back.

Dr Syed said that two others – a man and a woman – were taken to the Jinnah Post-Graduate Medical Centre in an injured state. The police surgeon said the condition of both the injured foreigners was critical as they had suffered bullet wounds in their abdomen.

Both were provided initial treatment at Jinnah Post-Graduate Medical Centre and after completion of medicolegal formalities, she said, adding that they were later shifted to the Aga Khan University Hospital for further treatment.

Asif, a neighbour of the Chinese couple who also owns a clinic in the area, said that the injured couple had children who live abroad, while Dr Hu’s brother, who is also a dentist, runs a clinic in another area of the city. Meanwhile, the deceased man working as a “cashier-receptionist” was also a relative of the couple, he said.