Best of Friends by Kamila Shamsie is a labour of love 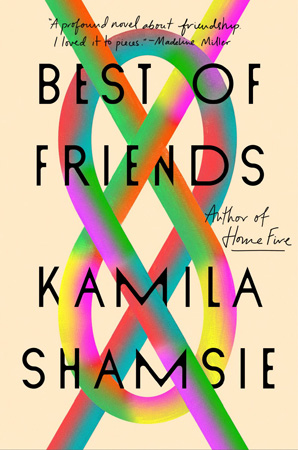 The true horror of puberty isn’t the emergence of surprising hairs and baneful odors but the abrupt arrival of consequences. Physical ones, obviously – like the sudden possibility of getting pregnant or impregnating someone – but also existential consequences. To enter puberty is to discover not only that the stakes have ratcheted up, but that such a thing as “stakes” exist.

Kamila Shamsie’s novel “Best of Friends” begins at this volatile time – and in a volatile location, too: Karachi, 1988. The best friends are Maryam Khan and Zahra Ali. Maryam is intuitive and romantic; Zahra cerebral and skeptical. Both are 14 years old. Both are privileged but only Maryam is superrich, with private security guarding the family manse and a promise that she will inherit her grandfather’s luxury leather goods business.

Roads are about to fork. Puberty comes to Maryam first. Initially she thinks she has “lost the ability to judge her own dimensions” – like a person hopping into a rental car and immediately severing a side mirror – until she observes that when she accidentally bumps breast-first into strangers, the strangers are always, and suspiciously, men. Zahra experiences her own similar metamorphosis soon after.

Their new visibility is briefly enjoyable. Being a pretty young girl delivers all the rewards of fame without any of the striving normally required to achieve it: People are nice to Maryam and Zahra, boys are awed by them, strangers are glad to perform random favors. But the downside is significant. An ambient thrum of potential sexual violence culminates in an episode where the two are abducted – though not physically assaulted – by a classmate’s driver.

At the novel’s midpoint we jump forward three decades to London in 2019. Here it becomes clear that “Best of Friends” is not quite a novel but more like two novellas, the first energetic and the second bland. Going from the Karachi half to the London half is like exiting an idiosyncratic local restaurant and entering a Starbucks. There’s an anonymous sleekness – almost a C.G.I.-enhanced quality – to the second section.

It begins with a pair of articles: a profile of Zahra in The Guardian and one of Maryam in Yahoo! Finance. It is an awkward device for inserting 30 years’ worth of exposition, but nonetheless, here is what we learn: Zahra received a scholarship to Cambridge, got married and divorced, leads Britain’s oldest civil liberties organization and hangs out with George Clooney. Maryam, also a London transplant, became a tech millionaire at age 26, lost everything when the dot-com bubble burst, and rebounded as a successful venture capitalist whose firm bears the realistically awful name of Venture Further.

Because the book is a saga of close female friendship, it’s hard not to compare it unfavorably with Elena Ferrante’s Neapolitan quartet. Ferrante wrote about the pain of knowing oneself to be inferior to the person one loves most. In those novels, Elena was merely intelligent where Lila was brilliant; attractive where Lila was irresistible. But in other ways the personalities of the girls were complementary and their mutual understanding complete enough to approach a profound and sacred redundancy. (“Sacred redundancy” is the closest I can come to a definition of best friendship.)

The elements that intensified the friendship of Elena and Lila – their rivalry, crises, lopsided distribution of gifts – are present in “Best of Friends” but desaturated. So is the context. Ferrante conveyed a milieu as electrically as she did a relationship. Shamsie gets close in her evocations of 1980s Karachi, but the featureless depiction of London saps the novel of structure. The drama between Zahra and Maryam plays out as if against a green screen. Without a palpable sense of where we are and when, the characters – and everything they do, the whats and whys – take on the quality of anecdotes.

Back to Ferrante, again: That author used the device of dialect to study the nature of geographical belonging and estrangement. For Maryam and Zahra, educated in English from their early school days, there is no such fortuitous metaphor. Shamsie toys a bit with language, and by “a bit” I mean a handful of sentences about the inadequacy of legal vocabulary and the inclusion of an Urdu phrase at a pivotal moment. But these are offhand gestures, not a method of exploration.

If language is no obstacle to the women, neither is relocation. For both Maryam and Zahra the transit from Karachi to London is fairly easy. And maybe this is – not the point of the book, but a point of it: that sufficient funds, credentials and networks add up to a pre-assimilation that makes such an immigration as seamless as tapping a credit card against a machine in exchange for a venti oat milk latte.

Shamsie’s previous novel “Home Fire” was a retelling of “Antigone,” and readers who loved that book (as I did) might consider approaching “Best of Friends” with subdued expectations. There are plenty of sentences to cherish, as when a politician is described as a “sadistic flapjack” or when a 4-year-old Zahra perceives her father’s face as having “an odd texture” because she’s too young to fathom that adults can weep.

Even without the scaffolding of a Greek tragedy, there is a version of this novel that could have worked. The lives of Zahra and Maryam don’t intrinsically lack conflict. There is plenty of fiction about people who enjoy material comforts while suffering from psychological or spiritual torments. The problem is that these two are never convincingly tormented; only hassled, and their responses are proportionately bloodless.