Save the Children pledges rehab of students in flood-hit areas 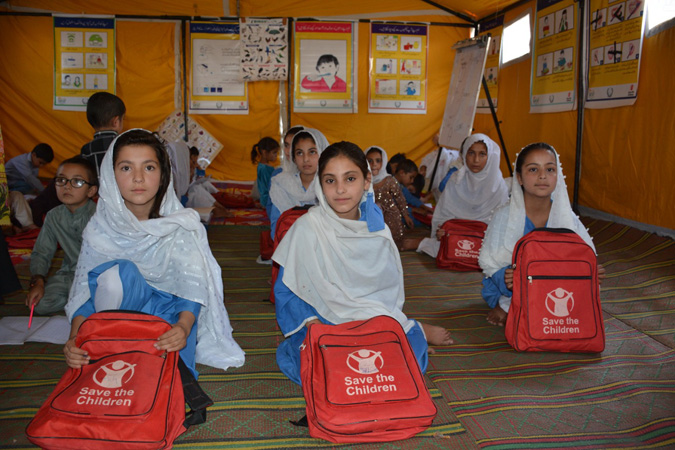 Taking part in the government’s initiative of extending relief and rehabilitation support to over 33 million people including 16 million children displaced due to the recent devastating floods across Pakistan, the international humanitarian organization Save the Children has pledged rehabilitation of flood-affected children across the country. “As part of our national child rehabilitation program, we have established two temporary learning centers at Dara Shah gram, a village of flood-hit Swat city, for children, where over 150 students are enrolled to provide them with quality education,” Hassan Noor Saadi, Regional Director Asia, Save the Children, informed the media during his visit to these centres here on Tuesday.

He said that teachers, provided by the government, are giving education at these centres. “We have also arranged a child-friendly play space where these flood-affected children can end their anxiety through gaming activities,” he said.

Hassan Noor Saadi further added that “flood-affected Swat is the focused district of Save the Children in Khyber Pakhtunkhwa. By quickly responding to the national calls for relief efforts, we have also provided NFI kits, dignity kits and other necessary relief items in addition to tents to ten schools of the district.”

He revealed that Save the Children has also established a rural health centre in Bahrain, district Swat, where two doctors including a female and paramedical staff are providing health care to about 400 patients daily along with provision of free medicines.

“We have also arranged a psychiatrist at the health centre who is counselling children get out of the trauma in shape of flood miseries,” he said.

The latest figures show that 33 million people including 16 million children have been severely affected by the devastating floods in 116 districts across the four provinces. The outbreak of watery diarrhoea, typhoid and malaria are rapidly increasing as a result of the stagnant water in inundated areas. Over 134,000 cases of diarrhoea and 44,000 cases of malaria were reported in the hardest hit area of Sindh this week. So far, the floods have also damaged 23,900 schools, 1460 health facilities, and 12,000 KM of roads remain under water.

Giving details of their relief operations, the Regional Director, Save the Children said that they have planned to set up 100 temporary learning centres across the country besides rebuilding partially or fully damaged schools across the country especially Sindh, Balochistan and Khyber Pakhtunkhwa.

Save the Children has already initiated response in most affected provinces of Balochistan, Khyber Pakhtunkhwa and Sindh. It is going to expand and address the immediate survival needs in the worst-hit districts to minimize the adverse effects of flooding on health, food & security, and nutrition of children, women, and their families.

As of today, Save the Children has reached over 29,000 people, including 14,000+ children through the life-saving activities under the flood response 2022. Besides, Save the Children is in regular contact with various international donors, and SC member offices to expand support to the affected communities and children, working closely with the National and Provincial Disaster Management authorities, and local governments, for an effective and coordinated response.