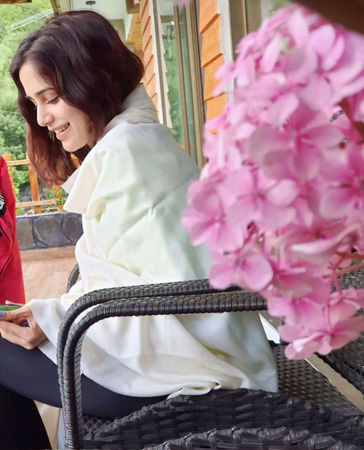 The first picture gallery of famed singer Aima Baig after the recent cheating controversy is viral on social media.

On her account on the photo and video sharing application, Monday, the ‘Do Bol’ singer shared a new three-picture gallery on the feed as she lounged around beside the calm background.

“Wondering if anyone cares?” Aima Baig wrote in the caption of the viral picture gallery.

The Instagram post was showered with love from her 4.4 million followers on the social platform and received thousands of likes in addition to uplifting comments for the celebrity from her friends.

Have a look at what Instagrammers wrote on the viral post:

My baby girl love you?

It is pertinent to mention that Baig was recently accused – by British model Taloulah Mair – of cheating former beau Shahbaz Shigri with Qes Ahmed. While Shigri remained tight-lipped about the matter, both Baig and Ahmed had issued their public statements on the controversy and made some shocking revelations about Mair.

To note, Baig announced break-up with her ex-fiancé Shigri earlier this month. Aima Baig and Shahbaz Shigri exchanged rings back in March 2021 and continuously made headlines with their romance and heavily cheesy Instagram odes to each other, before parting ways after a year and a half.