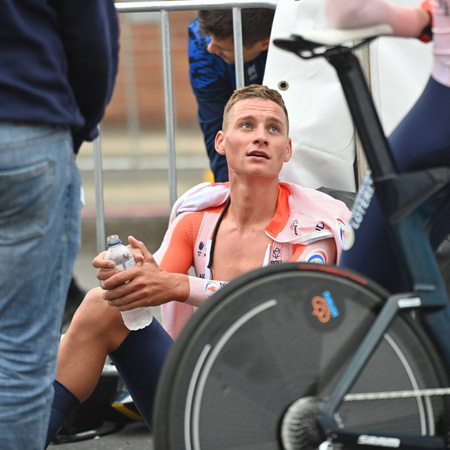 SYDNEY: Top Dutch cyclist Mathieu van der Poel pleaded guilty Monday to common assault after being arrested over an altercation with two teenage girls at a Sydney hotel, a court official said. The 27-year-old was detained on the eve of Sunday’s elite road race at the world championships in Wollongong, where he was among the favourites. Van der Poel, who has won a stage on the Tour de France, was due in Sutherland Local Court on Tuesday but pleaded guilty on Monday and was fined Aus$1,500 (US$1,000), according to a court statement provided by an official.

He is reportedly on his way home to the Netherlands, with his lawyer Michael Rowe saying his passport had been returned and he was free to depart Australia. “I’m sure he’s keen to leave the country after this,” he added. Police alleged that the cyclist had an altercation with two girls aged 13 and 14 on Saturday evening and pushed them “with one falling to the ground and the other being pushed into a wall causing a minor graze to her elbow”. Van der Poel was charged with two counts of common assault. The court statement said he was fined Aus$1,000 for one charge and Aus$500 for the other. “It’s a sad result because I think obviously he was very frustrated with teenagers knocking on his door causing him to not be able to get to sleep,” Rowe told Dutch broadcaster NOS outside the court. “He’s gone out to speak to them, they’ve knocked on his door a number of times… it was very plausible how it all happened and it’s very disappointing that he’s been convicted of this offence.” Rowe said he planned to appeal with Van der Poel having “a great reputation”.

Let down: “He’s flown all the way to Australia, it’s a massive event, only those who understand cycling realise how big this event is,” he added. “He felt like he let his country down, he felt like he let his team down. It’s a long way to come to have circumstances like this. He’ll learn by the experience.” Van der Poel started the 266.9 kilometre (165.4 mile) race around the coastal city of Wollongong, south of Sydney, but retired in the early stages. Christoph Roodhooft, a director of his Team Alpecin-Deceuninck, said Van der Poel was shattered by the experience. “He didn’t sleep all night and was mentally a bit broken as well,” he told reporters on Sunday.

“He was expecting a lot of this day (race) and did all he could in the last two months after his bad Tour de France. He had found joy and happiness again in cycling and was hoping to have a nice race.” In his absence, Belgium ace Remco Evenepoel stormed to victory with a spectacular solo ride, finishing 2min 21sec ahead of Frenchman Christophe Laporte after the 6hrs 16min endurance test to claim the rainbow jersey. Van der Poel has enjoyed a strong season with wins at Dwars Door Vlaanderen and the Tour of Flanders, third at Milan-San Remo, fourth at Amstel Gold Race and ninth at Paris-Roubaix.