* 'It's a lonely place up there now without her,' he told several fans in the large crowd gathered outside her home September 10, as seen in a video captured by The Sun 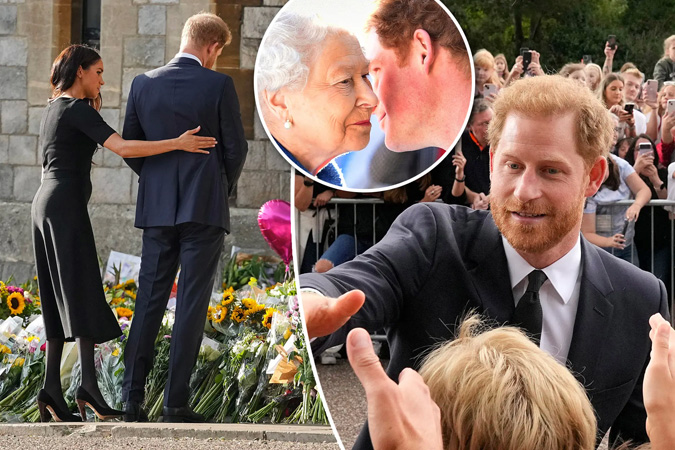 A quiet castle. Two days after the death of Queen Elizabeth II, Prince Harry greeted mourners outside Windsor Castle and reflected on the loss of his grandmother.

“It’s a lonely place up there now without her,” he told several fans in the large crowd gathered outside her home Sept. 10, as seen in a video captured by The Sun. “Every room she was in, we felt her presence throughout.”

Harry was joined by his wife Meghan Markle as well as his brother Prince William and Kate Middleton, who were recently given the titles of Prince and Princess of Wales by by King Charles III. This marked the first time in more than two years that the foursome-once dubbed the “Fab Four” by the British press-reunited in front of cameras to meet with members of the public.

The Duke and Duchess of Sussex had been in the U.K. already prior to the queen’s passing at Balmoral Castle, her vacation home in Scotland, on Sept. 8. After a grave message from her doctors, Harry, William, and other royal family members rushed to the 96-year-old’s side, but the brothers were unable to get to the residence in time to see her before she passed, according to multiple reports.

Harry, 37, and Meghan, 41, then paid tribute to the monarch by blacking out the website for their Archewell foundation and writing, “In loving memory of Her Majesty Queen Elizabeth II 1926-2022.” William shared a personal message to his “Grannie” on Instagram

E! News has learned the Sussexes plan to remain in the United Kingdom for the time being. While details about the couple’s extended stay have not been disclosed, they’re more than likely planning to join the rest of the royal family throughout scheduled events for the next few days of mourning, including the queen’s state funeral, which is scheduled for Sept. 19.

While Harry’s relationship with the royal family has allegedly been strained following his move to Meghan’s native country of the United States in 2020, Charles personally sent love to his son and daughter-in-law during his first public address as monarch on Sept. 9.

During his speech, the king noted, “I want also to express my love for Harry and Meghan, as they continue to build their lives overseas.”