Karachi’s historic National Stadium will play host to the first Pakistan-South Africa Test on Pakistani soil in more than 13 years when play begins on Tuesday, 26 January. The National Stadium Karachi is considered Pakistan’s fortress of Test cricket but South Africa remains one of only two teams to have beaten the home side in […]

Alan Wilkins, Bazid Khan, Ramiz Raja and Wasim Akram will be joined by former Test batsman Tino Mawoyo and Urooj Mumtaz as the Pakistan Cricket Board today announced broadcast details of the upcoming Pakistan versus Zimbabwe series. Urooj will be involved in the ODIs to be played on October 30, November 1 and 3 and […] 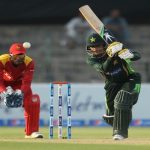