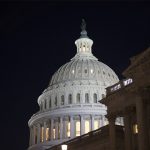 When historians write about the broader atrophy of the American system of governance, the passage of the 2017 tax-reform bill will be an illuminating event to dwell upon. Whatever the Founding Fathers had in mind, it surely can’t have resembled the unedifying spectacle that played out in the Senate this week. When the delayed vote […]

A quick reminder: when trying to figure out what Donald Trump is up to, it always pays to heed Deep Throat’s advice and follow the loot. The past few days have been busy ones on the Trump money beat. Although the latest developments aren’t particularly surprising, they add to the picture of a supposedly populist […]

Until now, Gary Cohn, the former president of Goldman Sachs, has been the invisible member of the Trump Administration. Now we know why: he has been busy preparing favors for his old pals on Wall Street. In an interview with the Wall Street Journal on Thursday, Cohn said that Trump was preparing to sign an […]

On Monday, Her Majesty’s Treasury released a report claiming that a “Leave” vote in the June 23rd referendum on whether the United Kingdom should leave the European Union would plunge the British economy, which has been growing modestly for the past couple of years, into a slump. The report says that, in the event of […]