Since inception, we have been found witnessing a grim “tug of war” in the political arena, which helped promote nothing viable but a spectre of bigotry, indifferences, mental servitude and hatred among the masses. This keeps promoting a subsequent “polarised politics” trend in every “boom and bust,” irrespective of its sporadic enormity, a casual substitute […] 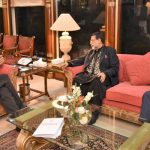 ISLAMABAD: Federal Aviation Minister Mian Soomro has said that Pakistan’s military is fully capable of thwarting Indian aggressions and has always shown how to defend Pakistan by thwarting evil designs of India. The minister expressed these views during his meeting with Prime Minister Imran Khan along with businessman and British Pakistani philanthropist Jawad Sohrab Malik […]