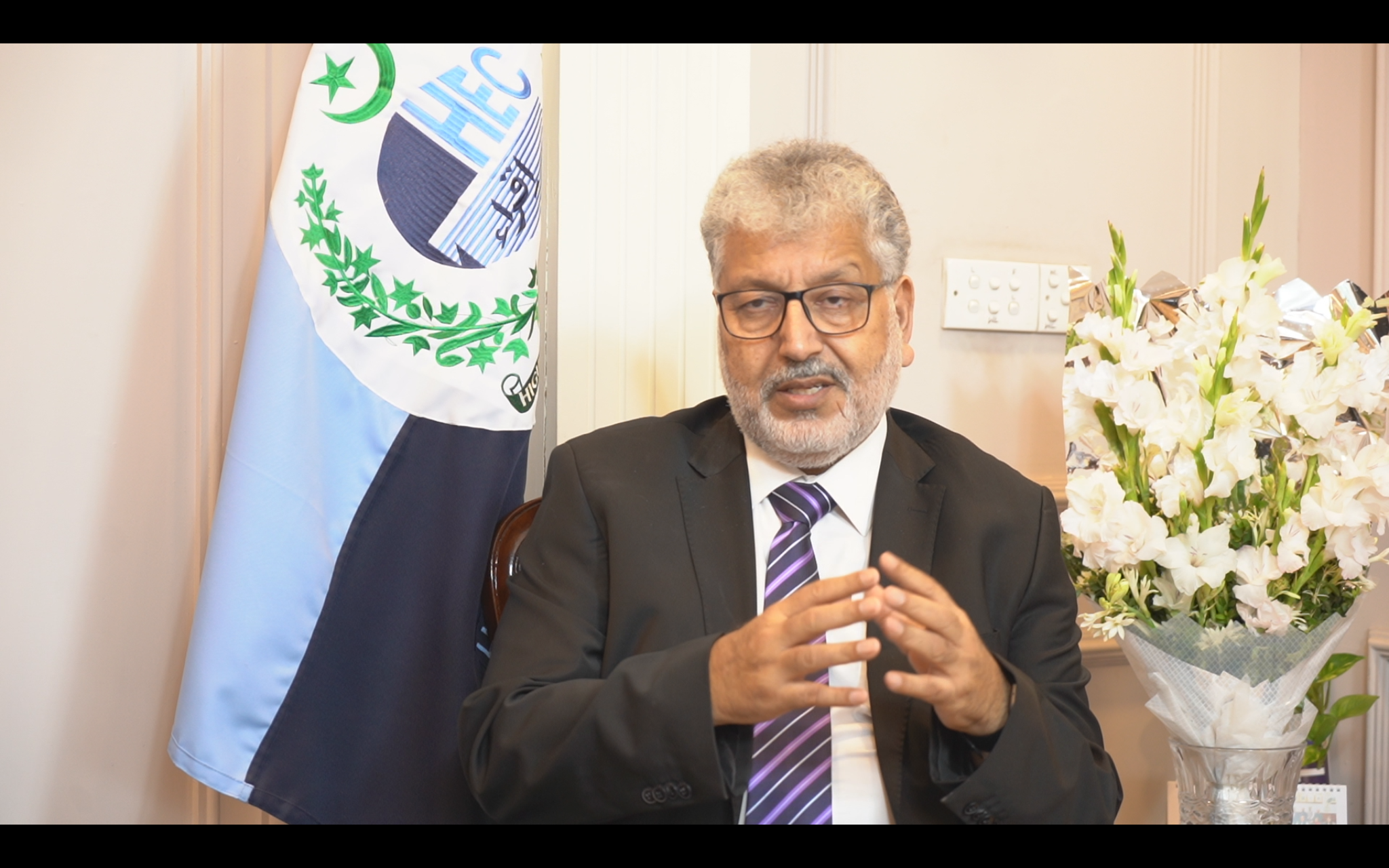 On the 20th Anniversary of Higher Education Commission Pakistan Daily Times interviewed newly appointed Chairman HEC Dr Mukhtar Ahmad who had already been heading HEC in Pmln previous term, During the interview he shared new plans and strategies HEC is going to follow to achieve their top educational goals regarding different Universities in Pakistan.

Chairman HEC in his interview addressed many issues that different Pakistani students face not only in Pakistan but also in foreign Universities during their studies and also focused on Universities’ policies that need to be reviewed.

In past few days students demand to postpone scheduled exams in different Universities because of the flood emergency in different areas was trending on social media, talking about it he said, we had a meeting with Vice Chancellors of all the Universities and proposed alternative exams schedule for those facing flood in their areas, he added as it’s still raining in few areas and we are afraid situation can again be worst so we have all the plans to avoid wastage of academic year of students.

Pakistani Students are raising a storm on social media over the issue of PIA charging an absurdly high airfare to China, after strong digital protest by students, PIA finally offered discounts to all the students on flights between Pakistan and China but the offer was rejected by most of the students calling it just a Peanut.

Chairman HEC said because of the economic situation in the World and also high pricing of petroleum products this Situation has become severe and HEC on its part has raised this issue with Ministery of Education and we are hopeful sooner a fare deal will be offered to all the students wishing to travel back to China for studies but the fact is due to Covid now things on international level aren’t the same.

Talking about increasing fees in Universities every year Dr Mukhtar commented that Universities are only allowed for annual 10% increment in their fees more than this can be reported to HEC and we will make sure to take strict action against the authorities involved, he added that Universities are also expanding their departments and facilities day by day so in that context they’re given permission to revise their fee structure annually in order to meet their daily expenses.

These days one of the biggest issues that most of the intermediate students are facing is random schedule of admissions in different Universities, answering on this he said he has already offered Chairman Fbise and Secretary IBCC to have a sitting with me in the presence of all the Board chairman in order to decide how we can declare inter result at the same time in all over Pakistan and meanwhile Universities can also make their schedule accordingly.

He assured HEC is ready to facilitate them at every level to make one entry test system for the ease of students, they will be in position to apply for admission in every university based on one national entry test.

He further said because of the multiple choices in the foreign scholarships now our students only want to go for European universities not KSA and UAE Etc, he told that KSA Government is offering best scholarships with international standards to facilitate Pakistani students, they must avail and also HEC is in close coordination with Canadian officials for Education exchange programs.

Chairman HEC Dr Mukhtar Ahmad in his interview emphasised on Skill based learning and encouraged Universities to be more focused on skills instead of degrees only, he said in upcoming years there will be no need of degrees, only skilled persons will have jobs and will make money, he said we have clear instructions to all the Universities especially 7 skills Universities to make students skilled product that can not only serve in Pakistan but also international market is looking for such persons to work with.

He told Daily Times that new Tech Universities in this regard are doing enough work but still there is a gap that needs to be fulfilled, In Noshehra, Pasroor, Kherpur, Haripur and other cities skills Universities are already working but Government of Pakistan is now taking this matter on serious grounds and more work can be expected in this regard in upcoming days.

Dr Mukhtar Ahmad encouraged all the teachers to dedicate at least 10 to 15 minutes of their class towards career counselling that is now need of the hour.

In the end he warned all the unregistered Universities operating in Pakistan and playing with the career of students to shut down their business. He also appealed students to keep highlighting such irregular programs and he assured that HEC will take strict action as per law.