Umerkot (September 15, 2022): Flood-hit pregnant woman Aabida and relief camp Umerkot. A combination of unprecedented rainfall and melting glaciers has inundated a huge swath of Sindh in recent weeks. Apart from dengue, diarrhea and conjunctivitis, another pressing problem that flood-affected people are facing is lack of medical facilities for pregnant women and their newborn infants.

According to the UN Population Fund, around 650,000 pregnant women in flood-affected areas of whom 73,000 are expected to deliver next month are in dire need of maternal health service. The agency has also warned that many women and children are at high risk of gender-based violence due to the chaotic situation. The situation has been made much worse after 1,000 health facilities in Sindh were destroyed, and damage to transport infrastructure means healthcare facilities including medical equipment and trained professionals are inaccessible.

In Umerkot, dozens of tent cities fit are perched in the different areas including Chachro Road Umerkot, Cattle Form Umerkot, Kunri Road Umerkot, Chhor Road Umerkot and Ratnor Road, the only possible ways for flood affected people to set their temporary tents, reached only by a sliver of road. 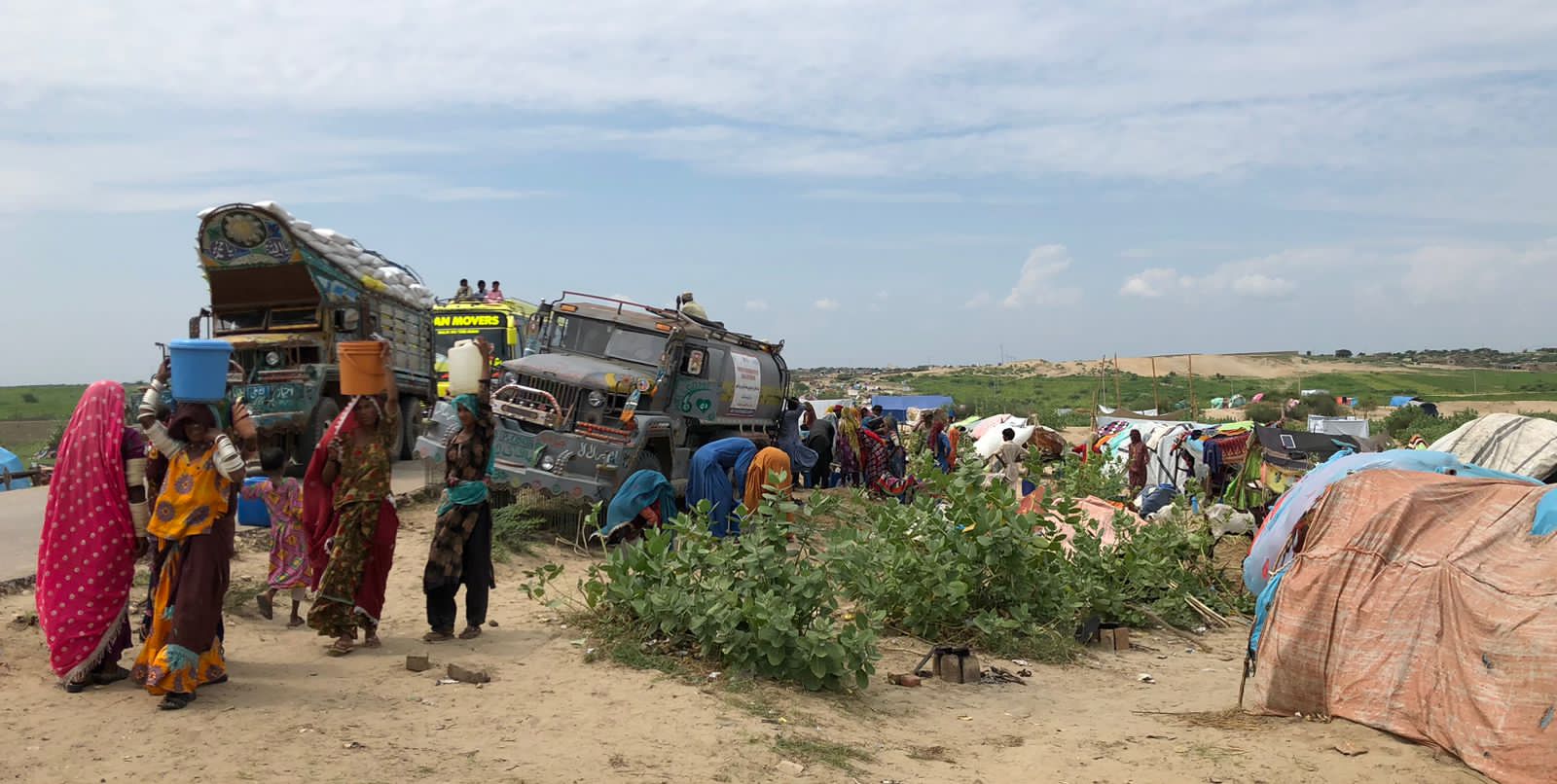 The temperature of Umerkot was 39 degree Celsius and Aabida, 28 years old a pregnant woman who is expected to deliver in the end of this week were sitting in shelter made by sheets of old cloth at Chachro road Umerkot, says “I am in fear that after losing my house to the waters, it is so challenging situation for me here in relief camp, eating rice (biryani/pulao) twice in a day could not meet in making magnesium and nutrients properly that help me in neurotransmission.”

She expressed that feeling the pain of displacement and having first baby in stomach has totally changed her, she couldn’t save hand-made cloths and other kits from her flooded home but giving the birth in relief camp wasn’t her plan. She cannot afford to go anywhere, even there is an only 01 place for showering or going to the bathroom for 25-30 families which is so far from her tent. “I am the only women in my family here at this camp, though I have husband with me, but he can just go with me till restroom and can wait for me outside, but we are living without safely managed sanitation, threatening health, and harming the environment. And one pregnant woman cannot feel comfortable in this position.” Aabida said.

People are facing massive devastation, miseries and pain. Monsoon rains have affected millions. But thousands of laborers and daily wagers, including women and children, are the worst hit. Aabida and many others like her have been living in the camps with no managed plan. 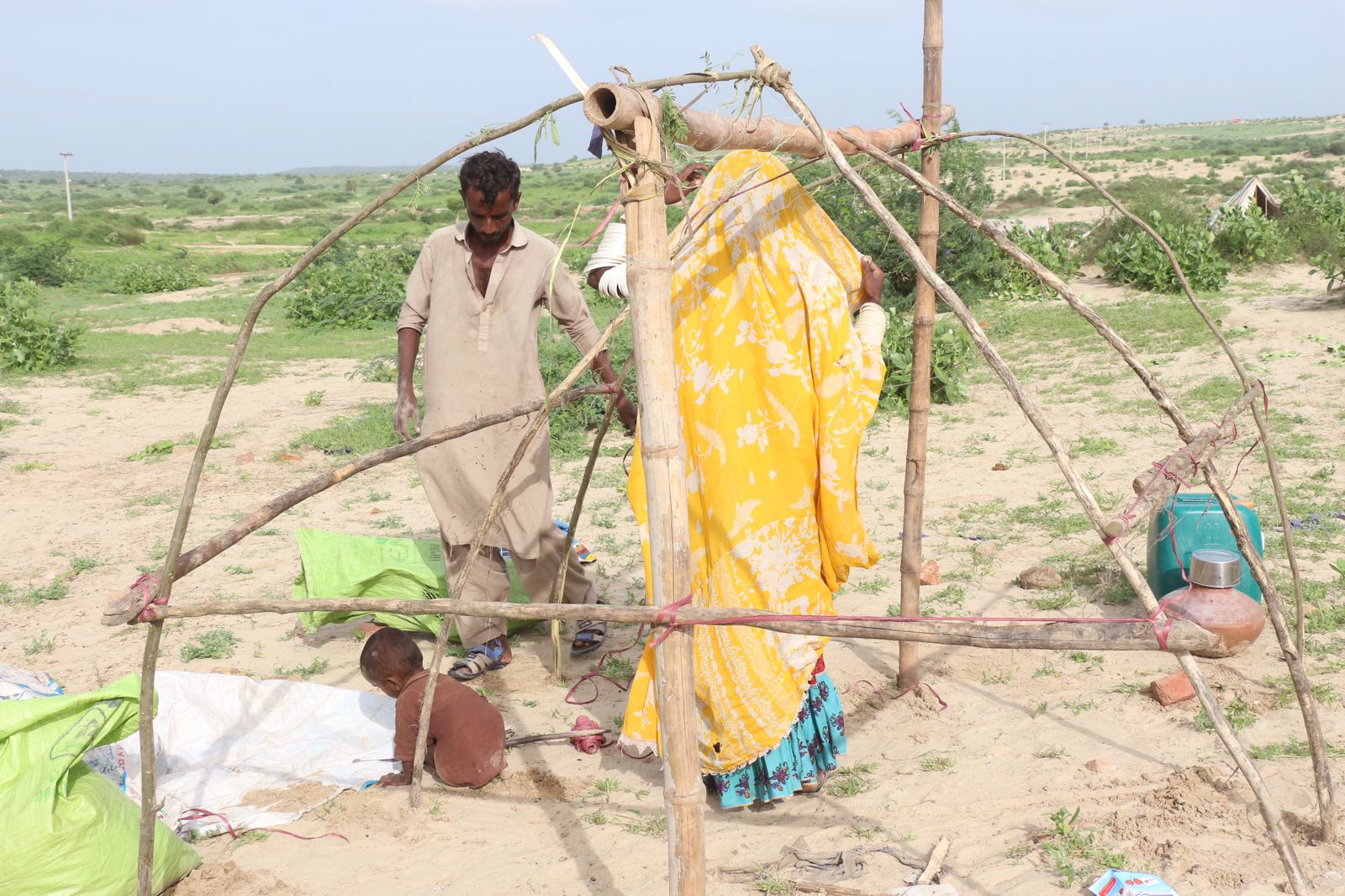 Bhagul, 40 years, forced to flee with her family weeks ago when floodwater inundated her village Walidad, who came to visit Aabida from her tent said that people who are living in the tents are from different communities and backgrounds even though some were so conservative in the regard of their religious beliefs and cultural sentiments, and many displaced women are having to live in close proximity to men who aren’t relatives for the first time in their lives.

Bhagul told Daily Times that she has witnessed Sindh’s harsh disasters in many ways throughout her life, but this is one of the worst. “I spend sleepless nights because Aabida is in critical condition and as a woman I can feel her pain, she is just like my daughter Nasibaan” she said.

District Health Officer (DHO) Umerkot organized multiple medical emergency fix and mobile camps having the medical supplies, nutritarian component, vaccination, malaria rapid test kits, mosquito net for pregnant women and lactating mother, Dr Durga Shanker who was examining Aabida said that pregnant women is in urgent need of health care, women who have been displaced by floods need proper medical health care to ensure a safe pregnancy and child birth, camps don’t much to offer for pregnant women, the food provided at the camps is also a problem for pregnant women. Responding to the medical team, Aabida emphasized that “From the day first I am eating oily and spicy Pulao, it causes acidity and anemia. It is not my wish to eat but I don’t have other option. I am not receiving proper food since I have reached here at camp.”