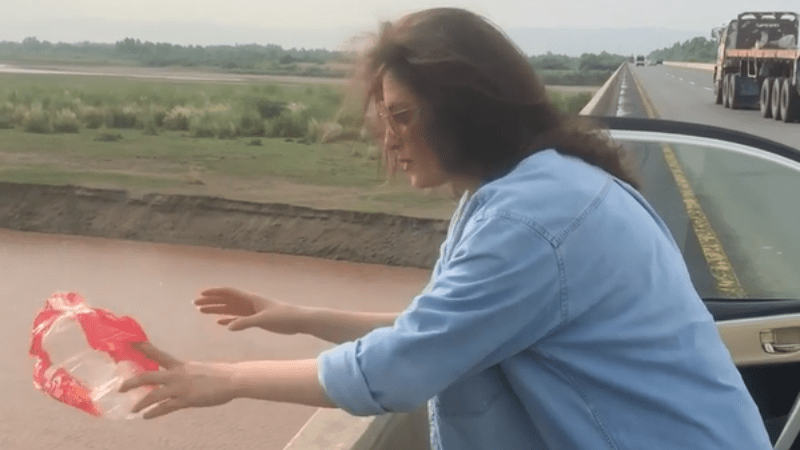 A recent video that has taken the interweb by storm is that of veteran actress Resham dumping pieces of meat, bread and plastic waste into a river.

The actress did this while she was on the way to Charsadda and her actions have caused a flurry of emotions in the general public.

This past Sunday, Resham took to her Facebook to upload a video of herself which showed her throwing bits and pieces of meat and bread into a river. But just when you think the actress will only dump the food in the river she goes ahead and throws the plastic bag that was holding the food as well.

Resham , You are feeding the river creatures and plus arranging to kill them as well. pic.twitter.com/GhdrVejzVr

This caused the general public to take a shot at the actress for her mindless actions amid the ongoing crisis that Pakistan is already facing. Esteemed singer Meesha Shafi also took to her twitter to call out the actions of the actresses in a tweet: “Distributing aid on camera to victims of horrific floods caused by giant climate change calamity right after throwing groceries and plastic shoppers/trays into a river (also on camera).”

The shots kept being fired as activist Shaniera Akram was also one to question the actions of the veteran actor by sharing the clip on her Instagram story. Next to the video she asked who is it that throws meat and plastic containers in to a flood-affected river, especially “on camera” that is.

Others retorted to show how demeaning her actions were in tweets that said: “Resham, you are feeding the river creatures and plus arranging to kill them as well.”

This video also caused an onslaught of jokes to be made with the actress as the main focus with her unconcerned behaviour of dumping plastic into a river.

Jokes aside, a lot of people were disappointed with the actor’s actions with the current crisis that Pakistan is currently facing and one twitter user also took to showing a Turkish actor’s, Celal Al, recent visit to Pakistan to provide active support to flood victims versus what Pakistani actors are doing.

The recurring hate caused the actor to defend her actions and voiced to The Friday Times on Tuesday that more serious and grave issues exist out there. “Women are gang raped here every day. Violence against women is commonplace. I was merely offering sadaqah [charity],” said Resham regarding her actions. The actress also added an “unconditional apology”, acknowledging that a mistake was made on her part when she threw the plastic container in the river.

But she also justified her actions, saying she had contracted Covid-19 twice and was “absentminded” because of it. She also mentioned the loss of her only brother not so long ago.

Resham also mentioned that her mental health is something she has been struggling with. She also posed the question as to why she was being given ‘special treatment’ regarding her recent actions which were done out of ‘absent mindedness’.

“I am in Charsadda as we speak. I have been quietly helping thousands affected in the calamity-hit district. But, of course, people are only interested in trolling me. I do a lot of good too,” mentioned Resham.

“I have an enviable social media following. Over 600,000 people follow me just on Facebook. That’s more than enough publicity for me. I feed hundreds. A great deal of what I make is spent on this but people will only comment on that video,” said the actress in her own defence.