3 levies personnel raped a minor in Panjgur district of Balochistan. The suspects subjected three minor boys to sexual assault. According to the Deputy commissioner Panjgur’s order the suspension of the Levies Sepoy is due to involvement in the Sexual Abuse of minors. Also, he captured nude videos at a government Bungalow. According to police inspector Amir Jan, the victims are of age 12-14 years.

Police have arrested one of the Levies men. However, police is conducting raids for the arrest of the other two.

Sources within the Levies department said the accused raped three minor boys at an official residence. The deputy commissioner Panjgur suspended the accused personnel and ordered an inquiry against him in this regard. 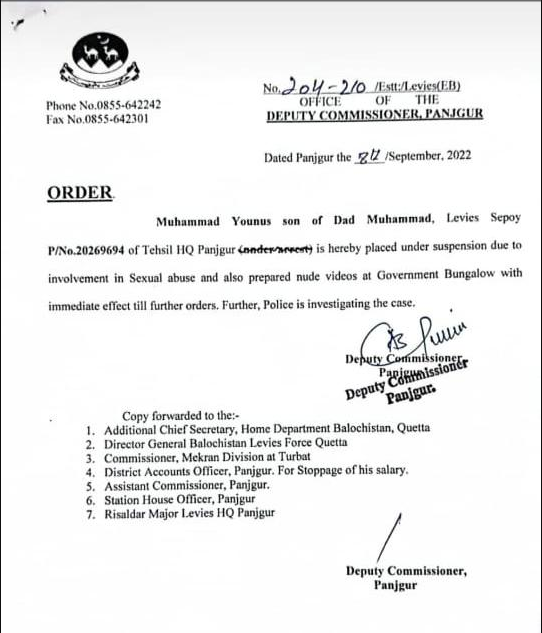 One of the boys’ video statement is viral on social media.

-Levies officials took him to the commissioner’s house saying that he was called by a government official. After going there, the accused gave him cold drink, after which he became unconscious. He said that the accused raped him while he was unconscious.

Assistant Commissioner Panjgur Amjad Hussain Soomro is the inquiry officer regarding the rape of minor boys.

In his statement to the police, one of the victim’s fathers told the police that the accused had also taken nude pictures and videos of the boys. The SHO said that the doctor confirmed the rape of a boy after the medical examination.

Parents of the other two boys have refused to conduct medical tests on their sons only one has agreed, Amir Jan said. The initial police investigation showed, that the accused Levies personnel had offered a cold drink bottle to the minor boys to make them unconscious.

Home and Tribal Affairs Secretary Zahid Saleem has also taken a notice of the incident. Further, he directed the deputy commissioner to ensure justice and the arrest of the accused involved in the incident.

The videos of the victims narrating the ordeal also went viral on social media. People have lashed out at the Levies’ men for their barbarism and urged the government to award them severe punishment.

Assistant Commissioner Panjgur Amjad Hussain Soomro said the suspension order of all those involved in the incident is out. They will be in police custody soon. However, he denied that the incident took place in the Commissioner’s House.

Contrary to the denial of the AC, a notification from DC Panjgur confirms that the crime was committed in the Commissioner’s House.

According to this notification, the suspension order of the Levies Havaldar posted at the Commissioner House for neglecting his duties is also out.

Order of investigation against the four employees including the three suspects posted at Commissioner House. 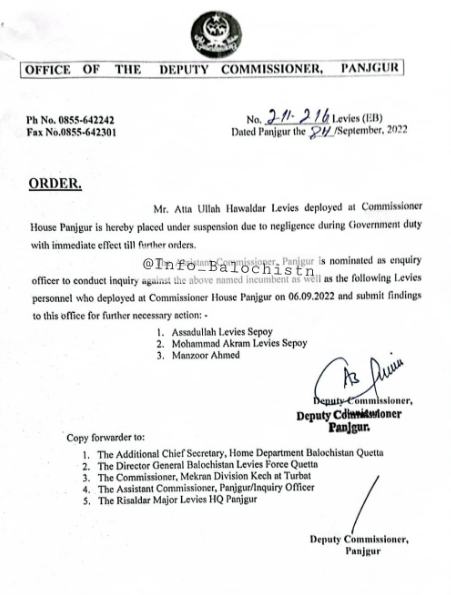