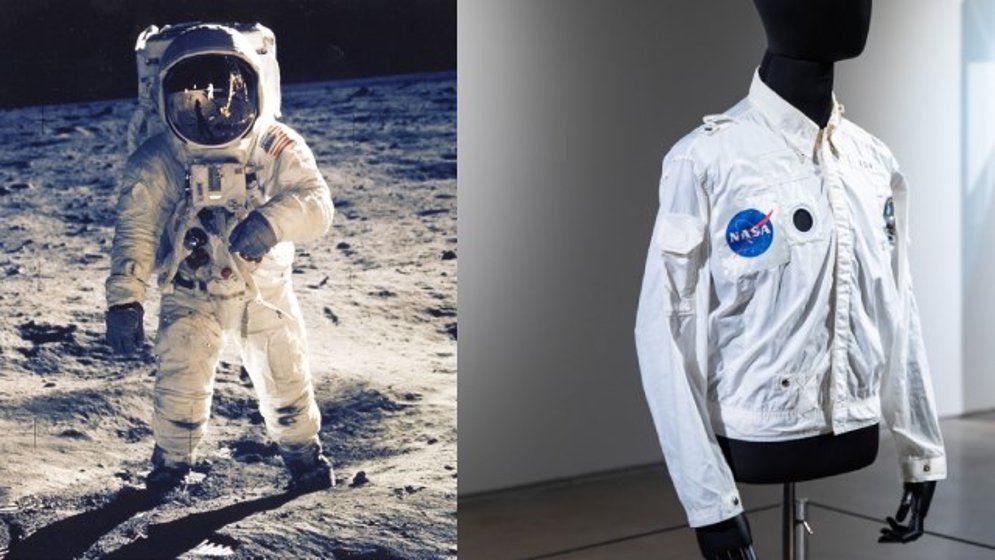 The jacket worn by retired astronaut Buzz Aldrin, when he set foot on the moon sold for a record-breaking price of $2,772,500 on Tuesday.
The in-flight coverall jacket features the historic Apollo 11 mission emblem and “E. Aldrin” for his full first name, Edwin. It is made up of a fireproof and tightly woven silica fiber called Beta Cloth.
The sale, which took place at Sotheby’s in New York made the garment the most expensive jacket sold at auction.
The jacket is part of a trove of personal memorabilia and historic NASA items and expected to fetch up to $2 million. The garment is the only flown garment from the Apollo 11 mission in private hands.  The jacket is worn by fellow crew members Neil Armstrong and Michael Collins. They both now housed at the Smithsonian National Air and Space Museum in Washington, DC
The 92-year-old Aldrin became the second person to ever set foot on the moon in 1969, following crewmate Armstrong.
Among the other items sold were flight plans from Apollo 11, including a complete summary of the mission, which sold for $819,000. As well as a summary of the touchdown of the lunar module Eagle, which sold for $327,600, over six times its high estimate. The collection also included a fire extinguisher flown aboard the lunar module. It included Several medals of service and a Congressional Gold Medal presented to Aldrin.
n 2011. And, a famed MTV Video Music Award “moonman” statuette whose likeness was based on Aldrin.
The items in the collection were “among the most significant and valuable space exploration artifacts ever offered at auction.”
In a press statement, Aldrin said that the collection represents the “summation” of his career as an astronaut.
“After deep consideration, the time felt right to share these items with the world, which for many are symbols of a historical moment. But, for me have always remained personal mementos of a life dedicated to science and exploration,” the former astronaut said, adding: “I hope that this collection offers some insight into what it has been like to be Buzz Aldrin.”