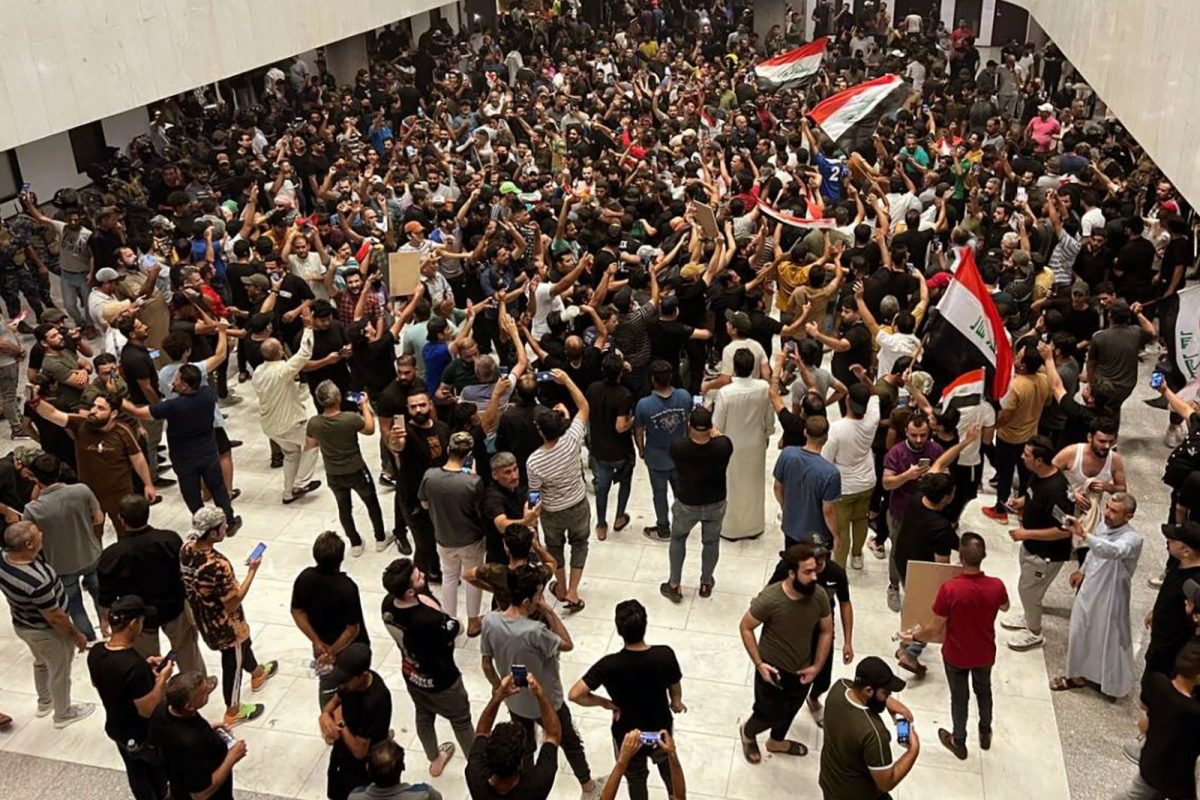 BAGHDAD — Hundreds of Iraqi protesters breached Baghdad’s Parliament on Wednesday.  Chanting anti-Iran curses in a demonstration against a nominee for prime minister chosen by Iran-backed parties.

The majority of the protesters were followers of the influential Shiite cleric Moktada al-Sadr. The demonstrators, all of them men, were seen walking on tables of the Parliament floor, sitting in the chairs of lawmakers and waving Iraqi flags. The incident raised the stakes in the political struggle for Iraq nearly 10 months after federal elections.

No lawmakers were present. Only security forces were inside the building, and they appeared to allow the protesters in with relative ease.

The demonstrators were protesting the recent selection of Mohammed al-Sudani. He is selected as the official nominee of the Coordination Framework bloc, a coalition led by Iran-backed Shiite parties and their allies.

It was the largest protest since federal elections were held in October. The second time Mr. al-Sadr has used his ability to mobilize masses to send a message to his political rivals this month. Earlier in July, thousands heeded his call for a mass prayer, an event many feared would devolve into destabilizing protests.

Hours after his followers occupied Parliament, Mr. al-Sadr issued a statement on Twitter telling them their message had been received. He told  “to return safely to your homes,” signaling there would be no further escalation to the sit-in.

Mr. al-Sadr’s ability to mobilize and control his large grass-roots following gives him powerful leverage over his rivals. His followers stormed the Green Zone in 2016 and entered the country’s Parliament building to demand political changes.

Protesters chanted curses against Iran and said, “Sudani, out!”

Riot police tried to repel the protesters using water cannons. The demonstrators scaled the cement barrier walls and pulled down slabs using ropes to enter the Green Zone. The demonstrators walked down the zone’s main thoroughfare with little resistance from security forces. The caretaker prime minister, Mustafa Khadimi, called for calm and restraint, and for protesters to “immediately withdraw” from the area. Mr. al-Sadr recently stepped down from the political process. Despite, having won the most seats in the October federal election Protesters carried portraits of the cleric.

Mr. al-Sudani was selected by the State of Law leader and former premier Nouri al-Maliki. Before Mr. al-Sudani can face Parliament to be seated officially as premier-designate, parties must first select a president. Protesters also chanted: “Maliki, garbage!”

The Framework. In a statement, said it had known of “calls urging chaos, stirring up strife” within the last 24 hours since nominating Mr. al-Sudani. Mr. al-Sadr exited government formation talks after he was not able to corral enough lawmakers to get the majority required to elect Iraq’s next president.

By replacing his lawmakers, the Framework leader pushed ahead to form the next government. Many fear doing so also opens the doors to street protests organized by Mr. al-Sadr’s large grass-roots following and to instability