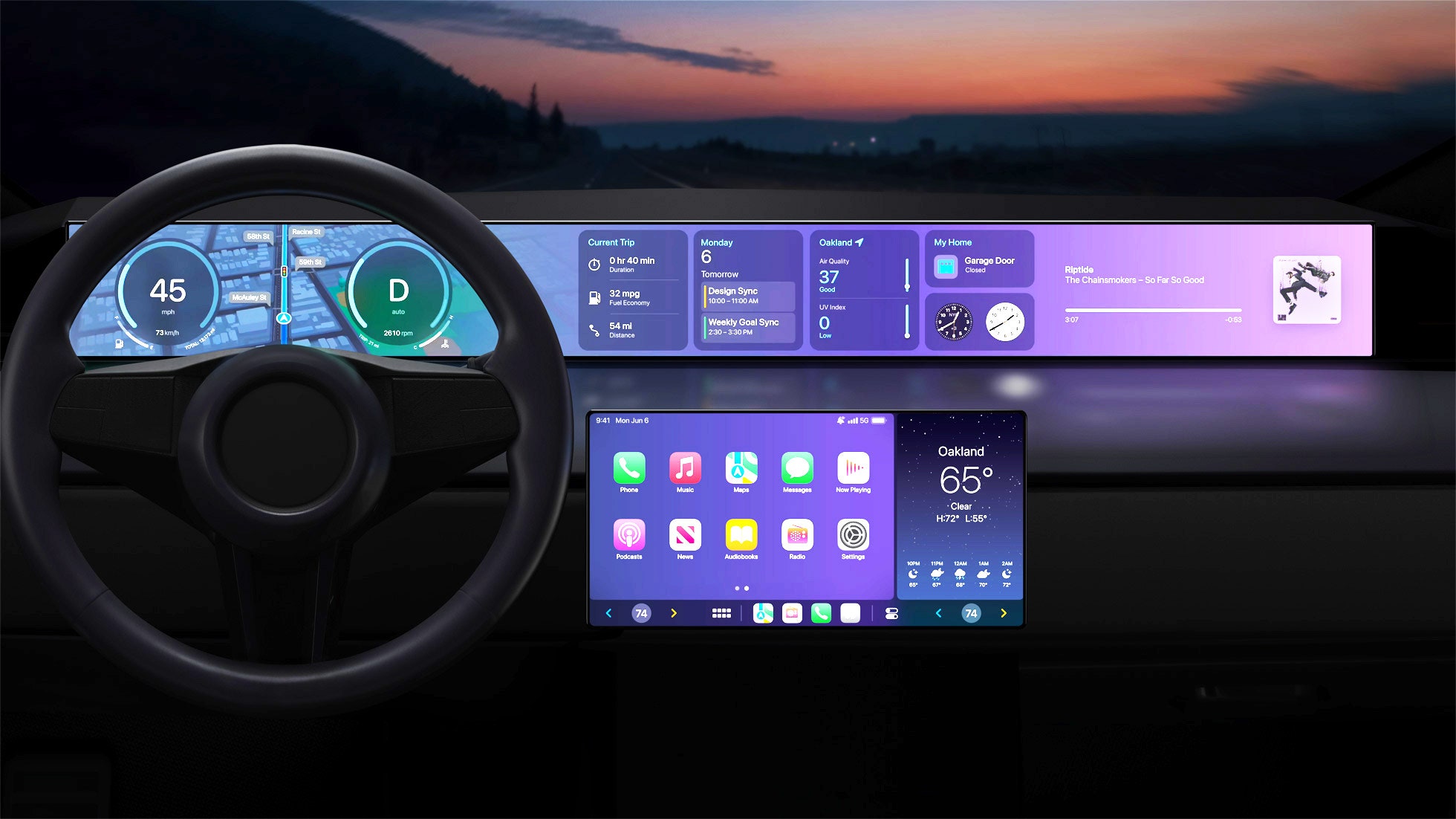 According to a new report, people drive an average of 29 miles a day in the US. They have phones. They’re going to want to use their phones while they’re driving. The question is, how can they do it safely, free from the distraction of the distraction-stuffed devices in their pockets?

For more than a decade, the answer from automakers has been to stuff their cars with sprawling and sometimes complex infotainment systems featured on mammoth touchscreens that stretch across dashboards—in the case of one Mercedes-Benz model, more than 4.5 feet across. While using those while driving is “not necessarily optimal,” says McGehee, director of the National Advanced Driving Simulator at the University of Iowa. He said it likely beats the alternative of people pecking at tiny widgets on a cell phone screen while driving.

Because these manufacturers have historically struggled to build functional software, tech giants like Apple and Google have offered their own in-car integrations, CarPlay and Android Auto. So McGehee believes the principle likely applies, too, to Apple’s recently announced next generation of Carplay, an infotainment escalation that will infiltrate the entire dashboard. There will be widgets. There will be choices of instrument cluster arrangements. Rather than simply mirroring an iPhone, CarPlay will let drivers change radio stations and also showcase vehicle data like fuel level and speed. The company says it will begin to announce partnerships with automakers late next year.

The embiggening of in-car infotainment has sparked understandable backlash. For years, safety advocates and researchers have warned that the systems designed by both automakers and tech companies fail to keep drivers focused on the road. “The state of infotainment systems is that there is far too much stuff at the fingertips of the driver,” says David Strayer, a cognitive neuroscientist at the University of Utah who studies how the brain multitasks. “They create a garden of distraction for the driver.”

But it’s also hard to pin down how much technology like phones and in-car infotainment systems contribute to unsafe driving. More than 3,000 people died in distraction-related crashes in 2020. According to the US Department of Transportation, it accounted for 8.1 percent of vehicle fatalities that year. Young drivers are more likely to be hurt or killed in distraction-related crashes. But data on the causes of crashes generally is “pretty coarse,” says William Horrey, the technical director of the AAA Foundation for Traffic Safety.

On-scene reports that do pinpoint distraction tend to focus on cell phones rather than in-car systems. And because so many automakers have different infotainment systems, with variations in menus and font size and button placement, even studies that hook up participants’ cars with sensors and cameras have trouble collecting enough data to come to any solid conclusions about how often screen-related distraction leads to injuries or deaths.

The new MacBook Air. Supercharged by M2. With an impossibly thin design. All-day battery life*. And a stunning 13.6” Liquid Retina display. Don’t take it lightly. Coming next month. *Battery life varies by use.