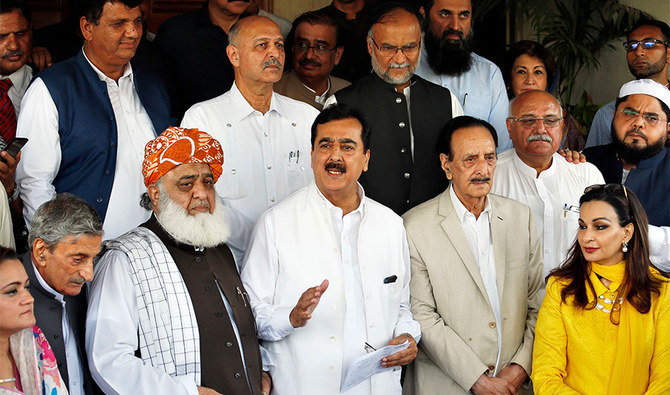 MULTAN: Leader of the opposition in senate Syed Yousuf Raza Gilani said on Monday that leaders of Pakistan Democratic Movement (PDM) alliance would discuss the next political strategy in the backdrop of July 17 Punjab bye polls results and reaffirmed Pakistan Peoples Party’s (PPP) commitment to stand by the allies through thick and thin, in Lahore on Tuesday.

PPP leadership decided that the party would stay supportive to allies in every difficult time, he said. Gilani said that PPP being part of PDM supported PML-N candidates wholeheartedly in the bye-elections. He said that all the 20 seats that witnessed bye polls in Punjab were the seats won earlier by PTI out which they won fifteen and lost remaining five in the recent bye polls.

Responding to a question regarding article 6 on PTI leaders, Gilani said that it was the prerogative of the government to take the decision, however, added that in his opinion it was not a practical option.

He said that PPP would be represented by former President Asif Ali Zardari in the important PDM meeting scheduled Tuesday to discuss the situation and carve out the next political strategy.

He said, contrary to PTI leaders’ claims of rigging and foul play, the whole process was held in a transparent manner, he added. All PTI leaders claims proved wrong. Gilani said that the alliance took difficult decisions and would move forward with consensus for stable political and economic environment in the country.

He added that political stability brings economic stability. He lauded PML-N leaders particularly Maryam Nawaz Sharif for the hard work during the election campaign. To another question whether PPP would be part of alliance in the next general elections, Gilani said that PPP was a political party having its own vision and manifesto adding that decision as to how party would enter next general elections would be taken by the party’s central executive committee (CEC).