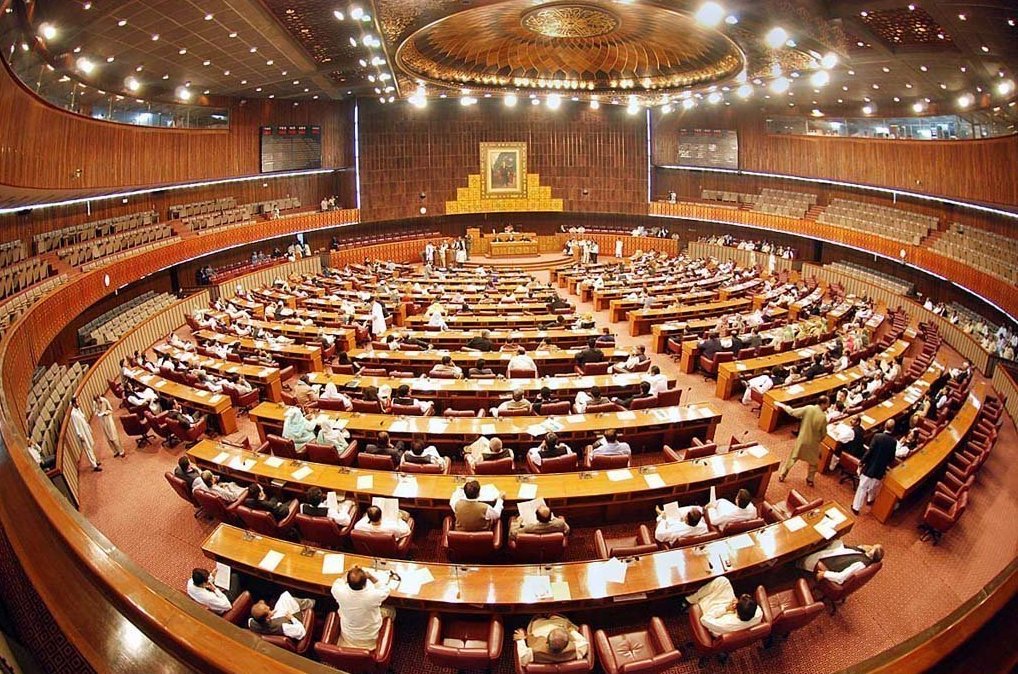 On Thursday, the National Assembly of Pakistan passed the Elections (Amendment) Bill 2022, which seeks to remove the use of electronic voting machines (EVMs) in general elections as well as disallows overseas Pakistanis from voting.

The National Assembly had bulldozed legislation for use of EVMs through the passage of a bill on November 17, 2021, giving overseas Pakistanis the right to vote in general elections through a voting device introduced by the PTI government.

Parliamentary Affairs Minister Murtaza Javed Abbasi presented the bill while MNA Mohsin Shahnawaz Ranjha read out his proposed amendments that were passed with a majority vote, with only members of the Grand Democratic Alliance opposing it.

Before presenting the bill, Abbasi presented a motion for allowing the bill to be sent directly to the Senate for its approval, bypassing the relevant standing committee. The motion was also passed by the National Assembly with a majority vote.

According to a statement of objects and reasons of the Bill, sections 94 and 103 of Elections Act 2017 were amended vide Act No.LV of 2021 for using I-voting and Electronic Voting Machines (EVMs) from the next General Elections. “The Election Commission of Pakistan (ECP) faces technical difficulties to embark upon conducting elections as per amended provisions ibid. Since Article 218(3) of the Constitution obligates the ECP to conduct free, fair & transparent elections, the instant bill proposes to restore the amendments of Act No. LV of 2021 to their original contents for conducting more pilot projects before using I-Voting and EVMs in general elections.”

An amendment said, “The Commission may conduct pilot projects for voting by Overseas Pakistanis in bye-elections to ascertain the technical efficacy, secrecy, security and financial feasibility of such voting and shall share the results with the government, which shall, within fifteen days from the commencement of a session of House after the receipt of the report, lay the same before both Houses of Majlis-e-Shoora (Parliament).”

Another amendment stated, “The Commission may conduct pilot projects for utilization of electronic voting machines and biometric verification, casting and counting of votes to assess the technical efficacy, secrecy, security and financial feasibility of the electronic voting machines and biometric verification system and shall share the results with the Government, which shall, within fifteen days from the commencement of a session of aa House after the receipt of the report, lay the same before both Houses of Majlis-e-Shoora (Parliament).”

Before the passage of the bill, Minister for Law and Justice Senator Azam Nazeer Tarar said the Election Act was a very crucial law that ensured a parliamentary democratic system, enabling the masses to exercise their right to vote in a free, fair and transparent manner and elect representatives of their choice.

He said the PML-N in its last tenure (2013-18) had revised the Representation of Peoples Act-1976 with a holistic approach after evolving consensus with all stakeholders and parliamentary parties, following which the Election Act-2017 was passed.

After the 2018-Elections, the minister said the PTI government had suggested a number of amendments including some controversial ones as these were done without appropriate consultation with stakeholders and even despite dozens of objections raised by the Election Commission of Pakistan.

Under the controversial amendments, he said the use of Electronic Voting Machines (EVMs) in the next general elections was introduced and passed tactfully in the National Assembly despite opposition members’ severe concerns, following which the bill was sent to the Senate.

Tarar said it was unfortunate that the EVMs were introduced without having any technical expertise, public awareness to use them and logistics as it was not practicable to implement them at once across the country.

After the presentation of the bill before the Senate, he said Parliamentary Committee on Electoral Reforms, headed by Senator Taj Haider, had held around 18 meetings and took input from experts, including representatives of the Election Commission of Pakistan (ECP), Free and Fair Election Network (FAFEN), Pakistan Institute of Legislative Development and Transparency (PILDAT), a Spanish Consultant firm that was appointed in line with the directives of Supreme Court and the countries practising EVMs, who viewed that currently it was not possible to use EVMs on such a large scale.

He said the use of EVMs without pilot projects in areas, having good literacy rate, was a great ‘risk’ as it involved billions of rupees’ additional expense and training of thousands of election staff. “We are not against the use of technology but want improvement in the system to ensure transparency.”

Keeping in view the expert opinions, he said the parliamentary committee had suggested that the I-Voting and EVMs provisions should not be made part of the bill, but the PTI government bulldozed its recommendations and managed to pass it in a joint sitting of the Parliament without debate and addressing concerns of opposition parties in haste.

Tarar said the Elections (Amendment) Bill-2022 was aimed at ensuring free, fair and transparent elections across the country.

He said the coalition government believed that Overseas Pakistanis were a precious asset to the country and played a vital role in strengthening the national economy, dispelling the impression that the amendments were aimed at depriving them of their right to vote. “Their right of vote to remain intact,” he said.