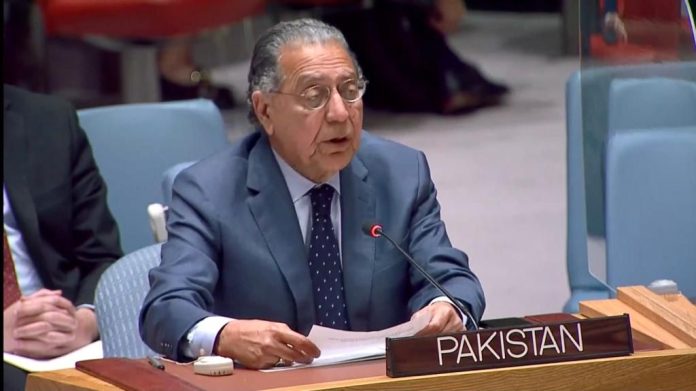 “Like other colonialists, India has sought to portray the Kashmiri freedom struggle as terrorism,” Ambassador Munir Akram told the 15-member Council, adding it was India’s suppression of their “legitimate” fight that violated international law and constitutes war crimes.

“The conviction and sentencing today by an Indian kangaroo Court of the Kashmiri leader, Yasin Malik, is the latest illustration of Indian oppression,” the Pakistani envoy added.

In this regard, Ambassador Akram cited Prime Minister Shehbaz Sharif’s statement that “India can imprison Yasin Malik but it can never imprison the idea of freedom he symbolizes”.

Speaking in a debate on ‘Protection of Civilians in Armed Conflict’,  he posed the question: how to protect civilians when the suppression of civilians is the very object of a military’s operations?

“This is the case when foreign occupation forces resort to the forcible denial of the right of peoples to self-determination and seek to perpetuate their illegal occupation,” the Pakistani envoy said, pointing out that the objective of the 900,000 Indian troops in IIOJK is to suppress the Kashmiri people’s demand for Azadi and their U.N.-promised right to self-determination.

Since 5 August 2019, when India annexed Jammu and Kashmir, Indian troops are stationed in every city, town, village and neighbourhood of the disputed territory to impose what India’s leaders have themselves ominously called a “final solution” for the Himalayan state.

Highlighting the extrajudicial killings, collective punishments, violence against peaceful protestors and the use of “pellet guns” that have blinded hundreds of Kashmiri children, Ambassador Akram  said that India is trying to transform occupied Jammu and Kashmir from a Muslim majority State to a Hindu majority territory by issuing millions of fake domicile certificates to non-Kashmiris, seizing and selling off their land and gerrymandering electoral constituencies.

“The danger of another conflict between Pakistan and India will remain ever present until the dispute over Jammu & Kashmir is resolved,” he warned.

Referring to the UN Secretary-General’s report about the prospect of nuclear conflict — once unthinkable —  was now possible, the Pakistani envoy said, “This observation applies not only to the dangerous conflict now raging in Ukraine, but also to a nuclearized South Asia”.

Noting that in 2021, the United Nations recorded at least 11,075 civilian deaths across world’s 12 armed conflicts, a decline compared to the previous year, he said the drop in casualties was due, in large measure, to the cessation of the conflict in Afghanistan after 15 August 2021.

“Despite the recent concerns regarding human rights and terrorism in and from Afghanistan, we believe that resumption of support to Afghanistan is essential to restore the banking and financial system, reconstruction, and infrastructure and revive the economy, including by the use of assets belonging to Afghanistan,” he said.

“Halting such support will not promote the international community’s objectives of human rights or counter-terrorism; on the contrary, it may achieve the opposite.”

Pakistan and Afghanistan’s other neighbours, he said,  were working with the interim Afghan government to address all issues, especially the threat posed by terrorist groups on its soil, and to promote peace and stability within the war-torn country  and the region.