The judge directed the federal and Punjab government to inform the court the reason why a citizen of Lahore was not an aggrieved party over the possession of Koh-i-Noor by the UK.

Earlier the law officers or federal and provincial government had raised objection on the maintainability of the petition. The counsel said that the petitioner was not an aggrieved person therefore his petition demanding the return of Koh-i-Noor from UK was not maintainable.

Petitioner Barrister Syed Javed Iqbal Jafri submitted that Koh-i-Noor was once the largest cut diamond in the world and 105-carat stone was presented to Queen Victoria during the British Raj. He alleged that British rulers during occupation of the sub-continent had seized Koh-i-Noor weighing 105 carats and worth billions of rupees, from Daleep Singh, grandson of Maharaja Ranjeet Singh and took to the UK.

He said that the diamond actually belonged to Pakistan as the gem hailed from the territory that became Pakistan in the aftermath of the historic partition of the subcontinent in 1947. He said that the snatched diamond was a cultural heritage of Punjab province and its citizens owned it in fact.

He requested to direct federal government to bring the diamond back to Pakistan. 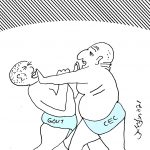