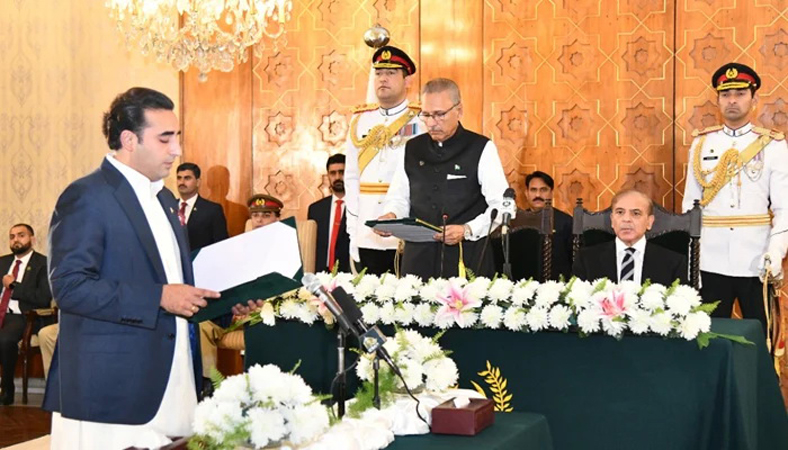 PPP Chairman Bilawal Bhutto Zardari Wednesday became the youngest foreign minister of Pakistan, breaking the records earlier set by his grandfather and a party leader. President Arif Alvi administered the oath to the Oxford-educated PPP chairman, who is 33 years, seven months, and six days of age – a development that came after much delay and deliberation. Former president Asif Ali Zardari and Bilawal’s sister Aseefa Bhutto Zardari were also present at the Aiwan-e-Sadr to see Bilawal take the oath. Federal Ministers, including Rana Sanaullah, Naveed Qamar, Khursheed Shah, Sherry Rehman, and State Minister for Foreign Affairs Hina Rabbani Khar, also attended the ceremony. Ex-prime minister Zulfikar Ali Bhutto was 35 years, five months, and ten days old when he was sworn in as foreign minister, while Hina Rabbani Khar was 33 years, eight months, and one day old. Following the oath-taking ceremony, Bilawal took charge of the Ministry of Foreign Affairs. The Foreign Office officials briefed the newly-appointed minister on Pakistan’s international relations. The foreign minister also paid a visit to the Chinese Embassy in Islamabad, while Minister of State Minister for Foreign Affairs, Hina Rabbani Khar, accompanied him. Bilawal expressed sorrow over the loss of lives in the terrorist attack on Chinese residents in Karachi and told the embassy officials that the relationship between Pakistan and China is a series of loyalty across generations. He said the terrorists made a failed attempt to strike on the basis of the Pak-China friendship. “The malicious intentions of terrorists cannot sabotage [this] friendship.” Four people, including three Chinese nationals, were killed while four others sustained injuries in a suicide bombing on the premises of the University of Karachi. Meanwhile, Prime Minister Shehbaz Sharif congratulated Bilawal Bhutto Zardari on the start of his public service career. “Heartiest congratulations to @BBhuttoZardari. I am confident he will add tremendous value to our foreign policy and inject it with a fresh perspective. I wish him the very best & look forward to working with him.” Following taking oath as federal minister, Bilawal called on President Alvi at the presidency.

During the meeting, matters of mutual interest and other issues were discussed. President Alvi congratulated him on assuming his office. Taking to her Twitter handle, Aseefa wrote: “Congratulations to the youngest Foreign Minister in Pakistan’s history @BBhuttoZardari.” “The task is daunting, and the previous government have hurt our international standing but I have no doubt that you will make our country, party, and family proud,” she added. Thirty-three-year-old Bilawal was first elected to the National Assembly in 2018. This is the first time he will be serving as a member of the federal cabinet.

Later in the day, the Foreign Office spokesperson tweeted that Bilawal had assumed charge as the country’s foreign minister.