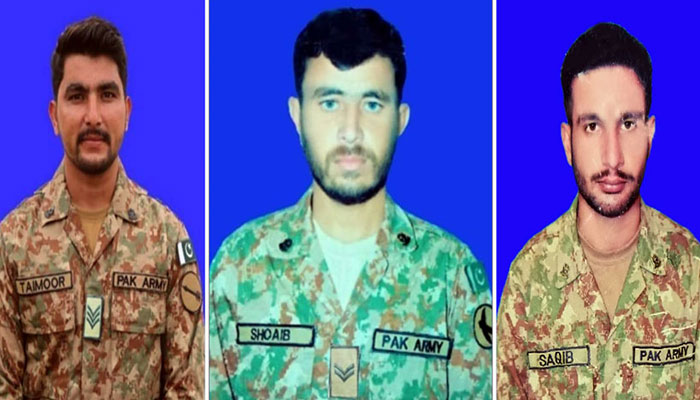 RAWALPINDI: Three soldiers are martyred in a cross-border attack at the Pak-Afghanistan border, the Inter-Services Public Relations (ISPR) said Saturday.

The military’s media wing said terrorists opened fire on the troops from across the border in the Dewagar area, district of North Waziristan.

The ISPR said Pakistani troops responded in a befitting manner and as per credible intelligence reports, terrorists suffered heavy casualties.

However, during the exchange of fire, three Pakistan Army soldiers also embraced martyrdom, the ISPR added.

“Pakistan strongly condemns the use of Afghan soil by terrorists for activities against Pakistan and expects that Afghan government will not allow such activities, in future,” the military’s media wing said.

It further added that Pakistan Army is determined to defend Pakistan’s borders against the menace of terrorism and “such sacrifices of our brave men further strengthen our resolve.”

Rana Javad said that the situation at the Western border has worsened, “which is very alarming.”

“We are continuously getting news of martyrdom although Pakistan has done fencing at the border and has also protested against the presence of terrorists in Afghanistan,” he said, adding that despite all this the border situation isn’t “stabilising’.

Javad further asserted that the Pakistan government should take notice of this seriously and all institutions should be on one page because “collective efforts are the need of the hour.”

“Pakistan has achieved this peace after a lot of efforts and each life matters,” he said, reiterating that this situation is “alarming”.

He added that the Afghanistan government should cooperate with Pakistan in tracking down those terrorists because Islamabad has always extended its support to the neighbouring county and has raised the issue of Kabul’s humanitarian crisis at various international forums.

“Pakistan needs to adopt a comprehensive counteroffensive to ensure the elimination of terrorist bases operating in Afghanistan. Both countries should work collectively,” he concluded.