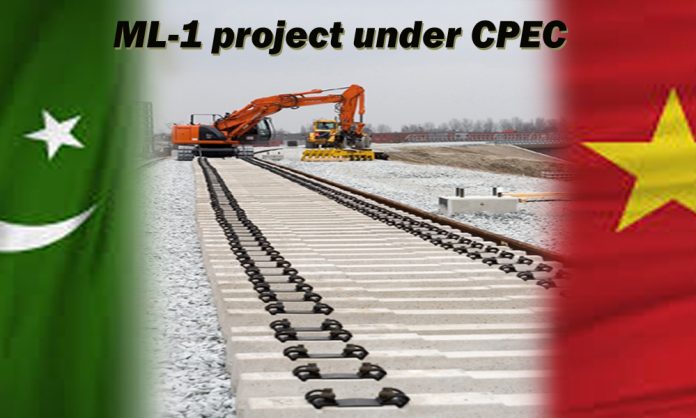 The agreement was reached at a virtual held meeting between the CPEC Authority and the National Development and Reforms Commission (NDRC) of China to follow up on the decisions taken during the recent visit of the Prime Minister to China.

The meeting decided that Pakistan Railways would immediately contact the National Railway Administration (NEA), to work out further details of the project.

The NDRC Director-General said that the relevant Chinese institutions were already taking the necessary actions to implement the understandings reached during the visit.

He said that the Chinese side attaches the utmost importance to the ML-1 project and several internal meetings between the National Railway Administration and other relevant institutions have been held to work out the modalities & prepare for the execution of the first Phase of the project.

SAPM CPEC Affairs stated that Prime Minister’s meeting with the Chinese leadership had been extremely fruitful and the relevant institutions of the two countries were fully geared to take the necessary steps to translate the understandings reached at the highest level into actual actions on the ground at the earliest.

The meeting expressed satisfaction at the pace of implementation of various projects in Gwadar such as the East Bay Expressway, New Gwadar International Airport, Pak China Friendship Hospital etc.

SAPM on CPEC Affairs expressed his gratitude to the NDRC for their support and facilitation in forwarding the agenda of CPEC.