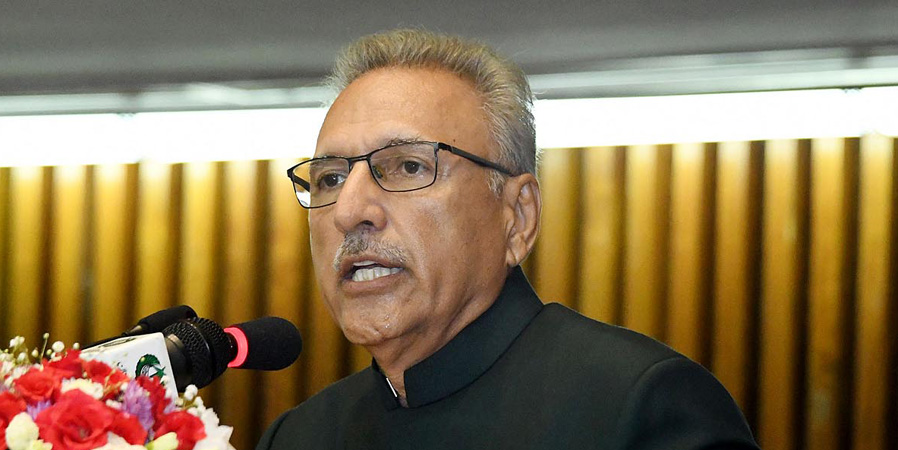 During an interview, the president said the world recognized Pakistan as ‘a peaceful and responsible nuclear state, governed by morality and moral values’.

Pakistan saved Afghanistan from being isolated, he said, adding during his participation in the ECO (Economic Cooperation Organization) summit, he had talked to its members whereas during extraordinary meeting of the foreign ministers of OIC (Organisation of Islamic Cooperation) in Islamabad, Pakistan portrayed actual picture of the war-torn country.

Contrary to Pakistan’s role, the president added, India’s profile was diminishing due to its antics. Today, the world recognized Prime Minister Imran Khan’s initiatives. The president also stressed upon the adequate training and increased enrollment of students in the IT (Information Technology) sector.

He said the AIOU (Allama Iqbal Open University) was imparting online education. The Virtual University had granted 48,000 admissions the current year. Such mode of education was inexpensive and correlated with the changes taking part at the global level. The president observed that 10 per cent of the youth could not progress to the next levels after doing their intermediate, due to financial constraints and compulsion for jobs.

He said the government was providing 50,000 scholarships to the youth, stressing that online education was the future of the world and through modern initiatives, they could handle the youth bulge. As chairman of the IT Task Force, the president said, he also held different meetings in that regard and stressed upon skills development and training for the young people.

He said huge transformation was taking place in the IT sector, and projected that the country’s IT exports could swell to $ 8 to 10 billion by the year 2025. “IT is a new industry of the world, which requires a trained youth bulge. The world requires such human resources. Japan, Germany, the United States and China all require the youth bulge and Pakistan has huge scope in this regard,” he observed.

The president said for the first time, the Higher Education Commission (HEC), on his direction, had framed a policy over online education. After a number of meetings with the HEC and vice-chancellors, he said, the Commission devised a policy to prevent and eradicate drug abuse issue in the universities.

The compulsory committees of the universities were tasked to look into the issue and take certain steps whereas effective legislation was enacted, he added.

President Alvi said through strenuous efforts, they created awareness for the issues confronted by the differently abled persons. Physically retarded persons were mentally equal to normal human beings so efforts should be made to ensure their access to public places, he added.

The president said they should be imparted education with job opportunities so that they could work as independent and earn their livelihood. About the efficacy of Federal Ombudsman office, the president said a public complaint was being resolved within average 58 days period. Decisions were made swiftly over a wide range of complaints arising out of utility bills, CDA, WAPDA, NHA, universities, tax, insurance, banks and federal institutions, women harassment and inheritance rights. The process required no lawyer and fee, and about 150,000 cases had been decided last year, he added. To another topic, the president observed that minorities were protected in Pakistan and enjoyed equal rights. The executive and judiciary and other organs of states had taken prompt actions in the recent past to protect minorities.

He cited the Sialkot incident and the generous gesture of Sialkot business community for making a donation to widow of the slain Sri Lankan national.

Contrary to it, he said, in India Christians were being targeted, besides the Muslims. There was complete ban on interfaith marriages there. Mosques and churches were attacked even Mother Teresa Foundation was stopped from collecting foreign funds, he added.

Sharing his retrospection over the bygone year, the president expressed the confidence that the government would succeed in overcoming the financial issues in the post-Covid scenario where the world commodities had been hit hard by the global inflation and price hike. The IT exports, jobs creation and utility of youth bulge of the country would be the main ingredients in this year to turn around the negative impacts of the coronavirus pandemic, he added.

Dr Alvi also underlined the need of continuity of keeping a focus on corruption to end the menace forever. The president viewed that the government’s efforts to take the common man along with its policies was a good omen.

Sharing his thoughts on opening of new economic avenues, he said in the past, the political parties in power inducted people on non-merit basis which resulted in the wrong decisions. Prior to coming into power, the Paksiatn Tehreek-e-Insaf, however, had decided against such trends of the past and went ahead to create jobs opportunities in the society through giving boost to exports, IT education and training, and incentives for the construction sector, he added. He said bank loans were being extended to youth entrepreneurs and trainees without any interest. The government had allocated Rs100 billion under the Kamyab Nowjawan programme in this year.

The president said involving the youth bulge into economic activities was a good process for improving the country’s economy. There existed huge opportunities which required public awareness, he added. He said during the Covid-19, the nation showed to the world a will to survive and overcome the challenge through intellectual talent and achieved great success.