Instead of playing centre court in Australia, Djokovic takes selfies in Dubai 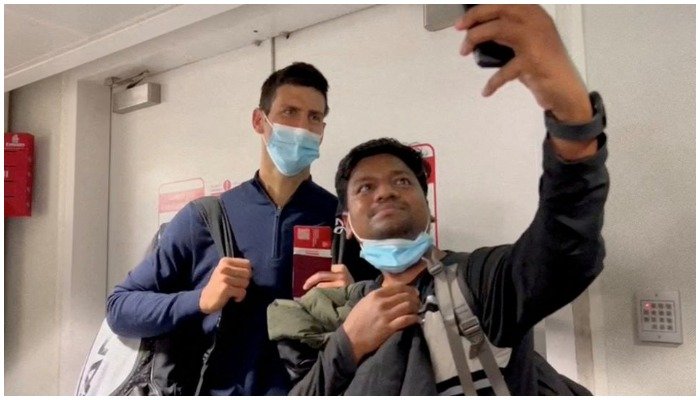 DUBAI: On the first day of the Australian Open, the world’s best male tennis player was taking selfies with fans at a Dubai airport arrivals gate.

Instead of warming up for his first scheduled match on centre court at Melbourne Park in front of thousands, Novak Djokovic was 11,600 km (7,200 miles) away, agreeing to photos with a handful of fellow travellers.

“Hey mate, sorry about what’s happened,” one man said as he lowered his face mask for a snap with Djokovic, who kept his own mask on as he waited just off the airbridge for his entourage to exit the plane.

The world number one flew out of Melbourne late on Sunday after the Federal Court upheld a government decision to cancel his visa, capping days of drama over the country’s COVID-19 entry rules and his unvaccinated status.

The ruling dealt a final blow to Djokovic’s hopes of chasing a record 21st Grand Slam win at the Australian Open, which started on Monday.

Djokovic was escorted to Melbourne Airport by Australian Border Force officials, who formed a guard around the player in an airport lounge before taking him to the door of the plane.

While his coach Goran Ivanisevic and two others in his entourage were seated in business class, Djokovic was afforded the privacy of first class for the overnight 14-hour Emirates flight.

His arrival in Dubai early in the morning was far more low key. Djokovic stood alone, wearing a blue tracksuit top, jeans and trainers, carrying a tennis bag and holding his passport, as he waited for his three companions to also exit the plane.

The player agreed to a handful of fan photos before demurring and allowing airport officials to move people along.

A few hours later, instead of gearing up for his scheduled first round match against compatriot and world number 77 Miomir Kecmanovic, Djokovic was escorted by airline staff on a terminal buggy to the departure gate for a flight to Belgrade, where he checked in alone.

While he was in the air from Melbourne to Dubai, Australian Prime Minister Scott Morrison left the door open for him to compete at next year’s Australian Open despite an automatic three-year ban from entering the country.

Morrison noted there was scope for that three-year ban to be waived “in the right circumstances.”

Djokovic, however, did not appear to be in the mood to contemplate a return to Australia, ignoring a shouted question in Dubai about whether he planned to attempt a return Down Under.