Philosophy of existentialism and waiting humanity

* The play begins with the introduction of two characters, Estragon and Vladimir, who are found waiting for Godot to come and solve their problem 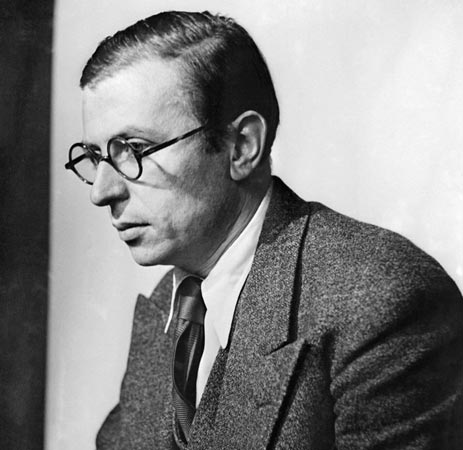 Sartre and Heidegger proposed the idea that human beings were not the part of the plan of universe and so their existence is meaningless and so are their sufferings because of this mis-fitness.

Now they are at liberty to find a purpose of their life in this meaningless world and so humans are what they do. But these human sufferings double when human beings find it impossible to exercise their will and have to go with the flow. This takes us to next step, i.e. Nihilism, which means that human beings are doing nothing in this world of nothingness. The play Waiting for Godot is a play based on the philosophy of existentialism which means that human being must be doing something to find the purpose of their lives, which even after their best, they are unable to find and so utter out, “Nothing happens, nobody comes, nobody goes, It’s awful”.

The play begins with the introduction of two characters, Estragon and Vladimir, who are found waiting for Godot to come and solve their problem. They have nothing else to do while they are waiting. These two characters prove that they are together in their misery and become the complements of each other while waiting for Godot. They first attempt to remove boots of Estragon and then Vladimir removes and wears his hat back. They spend their whole day doing nothing other than waiting.

During their wait, they think of attempting suicide by hanging themselves with the dried and weak tree on the stage but very soon realize that they don’t have strong rope to hang and the tree would snap with their load. So, they abandon the idea of hanging themselves and decide to wait for Godot till a boy comes and tells them that Godot is not coming to meet them at that day and that he would come the next day.

Prior to the arrival and disappearance of the boy, two more characters, Lucky and Pozzo are injected on to the stage. Lucky is tied with a rope controlled by Pozzo. It is only Pozzo who speaks while Lucky remains silent, though he is carrying load of bags. Lucky acts as the slave of Pozzo and Pozzo too demonstrates his authority on him. He even jerks him and makes him speak, think and move. They too disappear after the information brought by the boy about Godot’s not coming. Pozzo seems to be in control and Lucky silently obeys him to the letter and spirit. Though Pozzo too does nothing other than ordering Lucky and offering bones and vegetables to Estragon. Lucky is the suffering humanity not only because of the adverse scheme of nature but also because of the oppression and cruelty of capitalism or the other human controlling forces.

The second act of the drama also begins with the same scene and same characters with only two changes. Firstly, that there are a few leaves grown out on the tree. Estragon and Vladimir spend some time in finding how it has happened. Secondly, the role reversal takes place when we see Lucky controlling Pozzo now and doing the same as was done by Pozzo to him. Estragon and Vladimir spend their waiting-for-Godot-time by abusing each other, by playing with each other and by trying to think about their life. They keep on looking for Godot but find that he has not appeared so far. Ultimately, they receive information that Godot is not coming today. And so, nothing comes out of nothing.

The theme of essentialism, however, dominates the play because the characters are in a constant attempt of finding the purpose of their life. They are waiting for a divine person to come and solve their issues. This wait is in direct accordance with the Christian essentialism that everyone has no beginning and no end and that all are in search of some purpose of life. The play is demonstrating the wait more vigorously than the answers to the questions of humanity because all human beings are living in an absurd world which makes the play an absurd play. The characters of Estragon and Vladimir are not just two human beings, they are the humanity which is suffering and is baffled. In such a situation, humanity is attempting to find some solution in the arrival of Godot, who never comes. When all the aforesaid is combined together, it gives the impression of the play being based on essentialism and that very idea makes it an absurd paly.